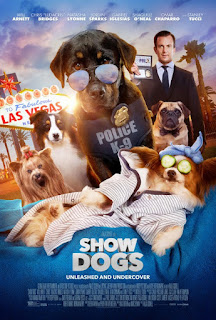 Show Dogs, directed by Raja Gosnell and written by Max Botkin and Marc Hyman, is one of the rare animated films that will appeal to children and adults equally.  There is a little pandering to adults in the romantic theme, and to children in a fart joke; but for the most part, the film models good messages about the importance of friends and family and respect for individual and cultural differences.
Max (voice of Ludacris) prides himself on being a police dog who is street-wise and disdainful of offers to be his back-up by his feathered admirers whose motto is, “Birds of a feather fight crime together.”  He takes pride in his abilities, and enjoys elite status in the New York Police Department. But he is suspicious when an FBI agent, Frank (Arnett) appears on the scene to solve an animal trafficking problem.  It seems that a baby panda has been taken from his mother, and Max makes a promise when he gets a glimpse of the child that HE will return him to his mother.  But when Max is ordered to partner up with the FBI agent to investigate the crime, still in the planning stages at a dog show, he continually tests Frank’s capabilities, giving him more than a few nips. Frank is just as unhappy as Max, and clearly knows nothing about dogs.
When he seeks out an expert in Animal Control, Mattie (Lyonne), she realizes right away that Frank (who has lost Max) is clueless about dogs; but she is a patient and kind person, so tries to help him.
What follows is a combination of a thriller (finding the perps), comedy about poor Max having to become an “undercover” show dog, and gratification for dog lovers who get to see all the breeds primping up for and competing for the prize of Best in Show.
Creativity abounds in this unusual pairing of a thriller within a dog show that is animated and also a comedy.  Beyond that, it is more than simply entertaining; it has truths about our world and current issues we’re grappling with. Heitor Pereira’s music enhances and offers further entertainment in its puns, and David Mackie’s cinematography meets every challenge with artistry and skill.

An animated film like few others, offering thrills, chuckles, and truths to live by.