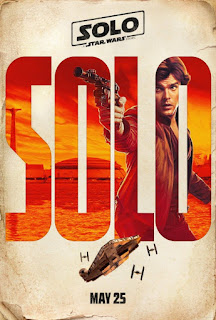 The origin story of Han Solo of Star Wars fame zips along at a fast pace, with special effects galore, which becomes tiresome even though they are very striking.  But they dominate the picture so much they look like an advertisement for the companies producing them (i.e., Lucas Films, Walt Disney Pictures, and eight special effects makers).  At the same time, the screen is so dark—especially during dramatic scenes when special effects are minimal—it’s difficult to follow the story closely, the darkness perhaps the fault of he theater rather than the film itself.  Dramatic scenes are few anyway, and next to special effects, incessant gun battles and space chases dominate the story in a video-game-like manner.
There is a story, mostly of Han (Ehrenreich) trying to escape where he is and getting into trouble doing it—more than once. But he is a fast talker, and manages to argue his way into places, convincing the person in charge to allow him to do a job.  In the beginning, he is with his love Qi’ra (Clarke), but they get separated early on, and years go by before they will be reunited.  By then, much has changed, at least for her.  She is now a lieutenant for Dryden Vos (Bettany), a crime lord.  The two run into each other after Captain Beckett (Harrelson) becomes Han’s ambivalent mentor following after Han is kicked out of the military for insubordination.  Beckett and Vos are engaged in a major caper to steal a valuable mineral, and Beckett allows Han to be a part of it.
What follows is like a “Who’s on First” (Abbot and Costello) routine.  That is, who’s in charge and who has the cards shifts, including a surprise group of natives who charge white people with stealing their natural resource.  At times, it seems like Han is on top, but then, maybe it’s Vos, oh, but there’s Beckett, and then, maybe Lando Calrissian (Glover), and Qi’ra surfaces from time to time.  These change-offs provide some tension and thrill to the story, but since it’s basically predictable, you find that there are few surprises.  Most basic, of course, is that Han Solo will survive and journey on.
If you are a hard-core Star Wars fan, this film might be thrilling for you.  For those somewhat removed, it is not likely to impress.  It would have been a much more powerful film if it had a deeper message and heightened dramatic power.