LU OVER THE WALL 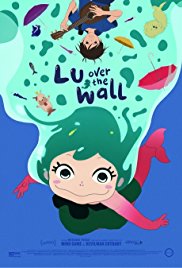 This Japanese animated fantasy film from Masaaki Yuasa seems more oriented toward adults than children.  The story is about a community’s lore about and apprehension toward a group of “Merfolk” who live under the sea.  There are tales of how they have kidnapped people in Hinashi and are the cause of all sorts of mysterious events.  A grandfather strongly admonishes Kai Sinterniklaas), his grandson, to stay away from the sea and not play music nearby (the music causes the Merfolk to emerge).  The trouble is, Kai loves music, and has had an unusual experience of coming face to face with a mermaid, Lu (Cabanos), who will break into dancing anytime she hears music.  He is intrigued, and they soon become friends.
Kai is a solitary, internalizing boy who says little and doesn’t seem to have any aspirations, although he does upload some of his songs on the internet.  But he has caught the eyes and ears of Yuko (Shah) and Kunio (Engman), his classmates, who need him for their band. Kai has a deep interest in the Merfolk, and although he is averse to joining their band, but when they tell him they practice on an isolated island near where the Merfolk are, that is the hook he needs to relent and join them.
The band’s story is interwoven with community events, and they get caught up in a major controversy that resembles our current world with factions supporting and opposing acceptance of another culture.  This aspect is a strong part of the film, especially when it shows how increased fear on both sides escalates the turmoil…and it is the part more meaningful to adults than children.  The film is almost two hours long, which, once again, seems inappropriate for children, the primary audience for animations.
The animation itself is beautifully rendered by the Fuji Creative Corporation in Japan and Anime Limited in the UK.  Perhaps it is not up to the artistry of the famous Miyazaki and Ghibli Studio, but it’s eye-catching and pleasing throughout.  Masaaki Yuasa’s direction with his and his co-writers’ storytelling makes this production well worth seeing.  There is a wonderfully humorous and well-composed scene of three characters floating side by side in the water after one of them was sure he would drown.  This is something both children and adults will get.

Animation that delights and surprises in an entertaining story with substantive social issues.