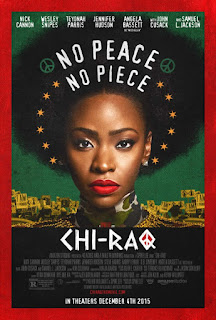 Spike Lee’s latest production is a modern operetta with rap music.  (I was grateful for the subtitles in the opening number, “Pray 4 my City” by Nick Cannon.)  Chi-Raq is a rapper’s term signifying that with its high murder rate, Chicago is more of a death zone than Iraq.  With the story’s basis in Aristophanes’ Lysistrata, the black and brown women in Chicago deny their men sex until they give up their guns:  “No peace; no pussy.”  The movement swells, and after the involvement of city and national officials, word spreads, and soon the chant is heard in native tongues around the world.  Women state emphatically that “Saving lives is our job” and advocate peace for all.  The film gets even more idealistic by the end when suddenly Fortune 500 companies are creating jobs for black men (at higher than the minimum wage), poor people are getting loans from banks, and so on.
I got a big kick out of Chi-Raq with its rap-opera quality, the basis of it being drawn from an ancient Greek play, and the suggestion that a movement for peace could spread around the world.  I particularly like the funeral service for a child killed by a stray bullet in which Father Corridan (Cusack) indicts politicians for bowing to the National Rifle Association’s pressure on them to defeat reasonable legislation on the sale of guns.  Corridan (based on a real person, Father Mike Pfleger, in Chicago) explains very well how the violence in the black community has developed (e.g., economic and social deprivation, disenfranchisement, and increased incarceration of black males for minor violations).
The cast is strong, beginning with Samuel L. Jackson’s narration, John Cusack as the white priest, Jennifer Hudson as Irene, one of the aggrieved mothers, and Angela Bassett as an older sister of Lysistrata with wise council.  Carrying the drama throughout are the main players, Nick Cannon and Wesley Snipes as leaders of rival gangs and Teyonah Parris (Lysistrata) as Chi-Raq’s (Cannon) girlfriend and leader of the movement calling for peace.
Chi-Raq is a serious film that points the finger at guns and gangs, but as well at government and society for disregarding the plight of the poor in our cities.  It places blight on our conscience, and Lee emphasizes the immediacy of these problems (constituting an emergency) that should receive as much attention as we pay to the disenfranchised in other countries.

Spike Lee indicts society’s role in Chicago’s designation as the murder capital of the U.S.

Posted by donnarcopeland at 11:08 AM