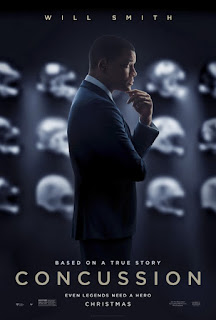 Young Dr. Bennett Omalu is from Nigeria, and from the time he was a boy he dreamed of coming to America.  He obtained medical degrees (bachelor of medicine and bachelor of surgery) at the University of Nigeria, obtained a residency position at Columbia University in New York, and along the way earned multiple advanced degrees and certifications, eventually ending up as a forensic pathologist.  When the story of Concussion (based on a true story) begins in 2002, Omalu (Smith) is at the Allegheny County Coroner’s Office in Pittsburgh, with the notable Dr. Cyril Wecht (Brooks) as his mentor.
Omalu will soon gain recognition as the physician-scientist who first discovered that head injuries among professional football players have long lasting and sometimes devastating consequences.  He called the condition chronic traumatic encephalopathy (CTE).  No small thing, because when it progresses, it eventually makes the person crazy, often driving them to suicide.
Now, football is big business, employing hundreds of thousands of people, seeing that disadvantaged kids get an education, and making senior executives in the National Football League very rich.  The NFL will not take Omalu’s discovery lightly, and will fight circulation of the information about the damage to players like the tobacco companies fought the truth about the danger of cigarettes.  It will attempt to destroy the careers of Omalu and his mentor Wecht using every scheme the executives can think of.
The themes of the film are very interesting and educational.  First is the dramatic story of how Omalu came to his conclusions, primarily by studying the brains of five or six players after they began developing problems.  This is not a smooth journey, and Omalu faces all kinds of objections and derision along the way, always with the backup of a strong mentor, Wecht.  Keep in mind that this drama is taking place in Pittsburgh, home of the Steelers, with one of the largest fan bases in the country.  Fans are just as vociferous in their objections to Omalu’s work as the NFL is.
Another enlightening theme is what the affected players go through once they develop the condition.  It’s heartbreaking to see the devastation to their minds, and consequently, the destruction of their families and finances.
Another theme that lightens the burden of learning about a shocking condition is the romance between Omalu and his eventual wife, Prema (Mbetha-Raw) that gradually develops after his priest puts pressure on Omalu, a loner completely dedicated to his work, to take in a border who recently arrived from Nigeria.  She brings order to his home life and provides impressive support as he goes through his trials.  A touching item she brings up at one point is that his last name in Nigerian means “If you know, you must come forth and speak.”  She reminds him at a time when he is doubting the wisdom of pursuing such a controversial subject.
Writer-director Peter Landesman (Kill the Messenger, Parkland) is gifted in his presentation of controversial subjects, maintaining a comfortable balance of factual information and emotional experiences of the players.  He does not preach, but maintains a neutral stance in laying out material for the viewer to consider.  His storytelling is captivating.
I would say that this could be Will Smith’s most important and well-done performance in his acting career.  He has been nominated for and won numerous awards, but he completely loses himself in this role and consistently maintains a plausible Nigerian accent throughout.  He and Mbatha-Raw (Belle, Beyond the Lights) a gifted performer as well, have good chemistry and come across as a very believable couple somewhat awed by their new love.  Supporting actors Albert Brooks, David Morse, and Alec Baldwin live up to their usual standards of quality.

A most enlightening and timely account of a troubling scientific discovery.

Posted by donnarcopeland at 6:47 PM