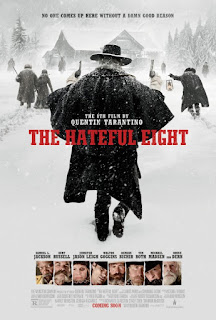 The Hateful Eight is divided into chapters.  Chapter 1 is entitled, “A Last Stage to Red Rock”, the full meanings of which are not immediately clear.  On the stagecoach is John Rich (Russell), a hangman and bounty hunter (“When The Hangman catches you, you don’t die by no bullet; you hang”) with his prey Daisy Domergue (Leigh) handcuffed to his wrist so she can’t escape.  They’re racing to Red Rock trying to beat the blizzard fast approaching behind them, and come upon Major Marquis Warren (Jackson) needing a ride because his horse perished on the trail.  As usual for him, Rich grills him like he does anyone, and if they succeed in convincing him, he turns out to be rather folksy with them.  Despite a brutal exterior (he continually batters Daisy), he is a soft touch if someone hits a certain button, but his mood can change on a dime.
In Chapter 2, “Son of a gun”, we meet another potential rider, Chris Mannix (Goggins), soon to be the sheriff of Red Rock if he can just get there.  He manages to get a ride as well, and the group continues until they have to stop at Minnie’s Haberdashery to wait for the blizzard to pass.  This is the site of most of the action in the picture, with skirmishes between different parties.  An air of suspicion rules since this is just after the Civil War (in Wyoming) and some are southern Confederates, and some Union sympathizers.  Racial tension is high in the presence of blacks, Mexicans, and whites.  And finally, the two bounty hunters, Rich and Warren (who’s bringing in dead bodies for his reward) must always be alert to protect their bounty.
Writer/Director Quentin Tarantino is a master of plot twists and thrills, and here he keeps us guessing and thinking a resolution is imminent through six chapters, continually springing plot twists that give new meaning to a situation.  Additional characters include an old Confederate General (Dern), a British gentleman (Roth); Bob, the caretaker of Minnie’s place (Bichir); and the Brit’s driver (Michael Madsen).  When suddenly, death visits unexpectedly, the plot turns to a mystery and deducing who the killer is.
Characteristic of a Tarantino movie, violence is so rampant, the viewer becomes inured to it, and after a while, someone like me stops reacting so much, especially since he often blends a bit of humor into the violence.  Or he has made you hate a character so much you get satisfaction in seeing that one get his/her due.
Tarantino likes to work with people from his previous films, such as Samuel L. Jackson, musician Ennio Morricone, and cinematographer Robert Richardson, editor Fred Raskin, casting director Victoria Thomas, and costume designer Courtney Hoffman.  Their excellent contributions help make his films masters of art.  Particularly notable here is Morricone’s haunting musical score and Richardson’s sweeping snow-laden landscapes and the menacingly colorful interiors that capture the drama of suspicion and violence.  Remarkably, the film was shot with the old Panavision lenses in 70MM, which is purported to be spectacular; however, unfortunately, my screening was in the current digital projection.
Kurt Russell, Jennifer Jason Leigh, Bruce Dern, Demian Bichir, Tim Roth, Walton Goggins, and Channing Tatum are Tarantino first-timers, but they are all superb in their roles.  Russell and Leigh constitute a unique pair that plays perfectly into sado-masochistic roles.  No matter how many times she gets battered, the Leigh character yells out whatever truth comes to mind, only to get immediately knocked in the teeth—and she never learns to keep her mouth shut; nevertheless she always comes out smiling and feisty.
I must say I did have reservations about seeing a female so despised by almost all the males (there are notable exceptions), who seemed to be acting out deep-seated hatred.  Perhaps Tarantino is aware of this in our culture and means to highlight it.  Or is this coming from something deep inside him?  I obviously don’t know.

Another significant work of the artist Quentin Tarantino, master of plot twists and thrills, always with injections of humor.

Posted by donnarcopeland at 7:02 PM