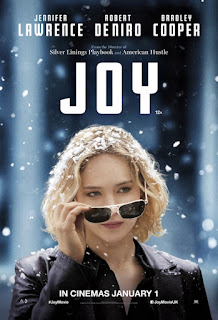 David O. Russell knows families, and in Joy he portrays them once again in all their glory—and shortcomings.  He wrote the script based partly on a true story by Annie Mumolo about a young housewife who was creative and resourceful from childhood.  Her grandmother predicted she would soar to great heights someday, although the journey would be challenging.  In young adulthood with a divorced husband still at home, two kids, a grandmother, and resident parents who are divorced, Joy (Lawrence) is the mainstay for all of them.  When it is clear she will need to support everyone financially as well as emotionally, she invents a handy “Miracle Mop” that doesn’t have to be wrung out by hand and can be thrown into the washer to clean it for the next room.  In addition to showing what happens across time in the family, the film shows the development of this remarkable woman from a simple housewife to an astute but compassionate businesswoman.
Russell goes a bit over the top in depicting this motley group, with a helpless mother (Madsen) who stays in bed and watches TV, a father (De Niro) who lacks the sharpness to run his own auto shop business and needs a woman to support him, and an ex-husband (Rodriguez), a club singer who can’t seem to get a place of his own, and a competitive half-sister (Rohm) who is rather a dim bulb.  They are all dependent on Joy and continually interrupt her for something they need.  She does have support from her grandmother (Ladd) and her kids, whose expressions always indicate that they are clearly understanding their mother and what is going on around them.  I always appreciate Russell’s respect for children’s perceptiveness and wisdom.
Family members contribute to the comedy in Joy (and there are dozens of funny moments), but the serious, more in-depth and fascinating aspect of the drama is Joy’s transformation across time, giving credence to her grandmother’s predictions and encouragement and her early creativity and intelligence (valedictorian of her graduating class).  Without anyone to show her the way, Joy has to try to sell her own product on television’s QVC, out-maneuver contractors who try to cheat her, and somehow secure the patent she needs for her own invention.  Bradley Cooper, a staple in any Russell-Lawrence film has the role of a supportive executive at QVC who gives her a second chance when the first attempt fails.
Danny Elfman’s music meshes artistically with the 1980’s culture and the mood of each scene, helping to carry it along its lyrical way.  Similarly, Linus Sandgren’s cinematography is ordered and sharp in the chaos of the story, helping to convey mood and spirit.  Or starkness, as when we see Joy in a bare, austere hotel room confronting a man she has never seen before to negotiate a settlement.
Jennifer Lawrence and David O. Russell seem to have a special synchronicity in their work together (and Bradley Cooper fits in seamlessly here, although he has a small role), and it shows in the quality of the films they make.  The supporting cast couldn’t be better, especially Robert De Niro, Virginia Madsen, and Edgar Ramirez.  But the topper is Isabella Rossellini, the wealthy widow who stands to lose everything she has by investing in this crazy family.  Rossellini brings such authenticity to the role you could swear she must have lived some aspect of it.

Joy—a joy to see—except when it’s sad and exasperating, and even then it’s entertaining.

Posted by donnarcopeland at 3:00 PM