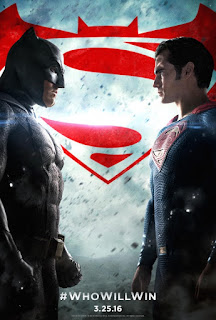 It’s a common human failing to mistake proximity for causality, and that is how the action in Batman v Superman begins.  Superman (Cavill) has been present in or associated with tragic events in Metropolis, so he is being regarded by some as a pariah, taking the law too much into his own hands and needing some oversight.  Senator Finch (Hunter) feels so strongly about it, she heads up a committee to investigate Superman.
Bruce Wayne (Affleck) is also convinced Superman is a danger to society and feels honor bound to set things right.  Thus develops a fierce rivalry between the two. Wayne’s trusted technician/adviser Alfred (Irons) tries to dissuade him from taking on such a battle, but Wayne seems to be a tormented soul who frequently feels he hasn’t done enough to protect humankind.
Another figure on this complicated chessboard is Lex Luthor, a megalomaniac, who is seeking to extend his power in the world by absconding with precious metals and engaging in other nefarious activities.  Wayne senses he is up to no good and does some investigating at his company.
Shadowing in the background for much of the story until the very end when she suddenly appears as a fighter for the good is Wonder Woman (Gadot).  What brings her out is a Kryptonite monster seemingly capable of destroying anything, including Superman.
One should go to this film expecting that it is mostly about the CGI accompanied by deafening sound effects with repeated urban devastation, fierce battles that seem to go on forever (Batman v Superman, and both of them with Wonder Woman v the monster), and near death experiences for Lois Lane (Adams) and Martha Kent (Lane).   It is filled with a jumbling hodge-podge of scenes that make it hard to follow the storyline.
Remarkable to me in this rendition is the number of self doubts voiced by its two heroes, Batman and Superman, which made me wonder if perhaps their differences with one another would have been lessened if each were more confident.  But that is me in fantasy; I think Director Zack Snyder and the other filmmakers purposefully set up this struggle because they thought it would make a better story for those who favor action movies.

A CGI spectacle with hand-to-hand combat scenes going on for 40 minutes or so nonstop.