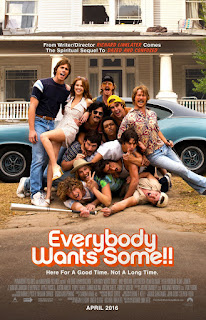 Typical of a Richard Linklater film, Everybody Wants Some has surface features and meanings (the entertainment) as well as deeper truths about humans and their behavior (the substance of the film).  Using baseball in a Texas college in the ‘80s as a frame, he highlights how single-mindedly boorish the testosterone-flooded players could be, filled with bravado and self-aggrandizement (their “asshole nature”, says one character).  This foolishness is indeed entertaining.  When two freshman pitchers arrive, they will be scorned and tested.  When one intensely competitive ping-pong player wants to fudge the score and loses his temper in a rage when he loses fairly, it does make us—and other characters—amused and a little incredulous.  In the team, we see poor losers as well as empty philosophical musing with truisms presented as deep thoughts.  Girls roll their eyes and walk away from them.  Although this section of the film was off-putting for me, the young men’s obnoxiousness is softened by Linklater’s forgiving treatments; he is always one to see beneath the bravado to insecurities and a genuine wish to be liked by others, which redeems the characters in our eyes.
The film covers one indulgently filled weekend before the team’s actual practice begins.  The film opens with Jake (Jenner), a promising player at his high school, expectantly headed to college on a baseball scholarship with “My Sherona” blaring on his car radio.  (Music selected by Linklater is vintage ‘80s rock.)  His eyes take in the campus where he sees a wealth of coed backsides to savor as he approaches.  When he arrives at the crumbling house provided to the baseball team, there are leaks in the pipes and sheetrock crumbling from the ceiling.  Moreover, he is met with hostility and disdain by just about everyone he meets.  But Jake has a strong character, and he does not jump to conclusions or get discouraged.  His gratefulness in being here at this time and his optimistic expectations fortify him.


His journey (the crux of the story) entails knowing the value of close connections, limit setting with others, and listening to inner wisdom.  Yes, he is derided, but he does not get drawn into petty rivalries and fantasies of revenge.  He is kind, forgiving, and understanding—as well as supreme in his ability to manipulate people in a positive way.  For instance, toward the end, when he is going to a performance arts party with his new crush Beverly (Deutch) and is getting challenged by his roommates to come along, he knows just how to get them there.  And these brutish oafs getting exposed to art and fantasy by their artistic hosts, get to experience some needed softening and humanness as well.
I attended the screening of Everybody Wants Some at the SXSW Film Festival.  At the Q&A, Linklater acknowledged that the film was based on his own experience of going to college in Texas on a baseball scholarship in the ‘80s.  The result is the product of his script as well as modifications that came up during filming, some contributed by actors.  In casting the actors, he said it was important that they be able to demonstrate athletic ability, because there would be a sequence in which their skills in this area would be critical.  And this is seen in an extended sequence of baseball practice toward the end of the film.
At the Q&A, Linklater commented on the solidarity of the cast and their willingness to accede to character changes in the interest of the story.  I got the impression that they not only had fun making the movie, but were sad as well that the project had come to an end.

A film about so much more than baseball.