IN A VALLEY OF VIOLENCE 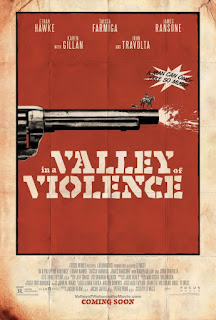 Boy!  What a nice surprise for my last film at SXSW this year in Austin, Texas.  Ti West (Roost, The Innkeepers) has ventured into the western genre and devised some imaginative tactics to enrich the experience of a western film.  I really think the cleverest is inserting arguments among men in the midst of gunfights.  That is, it’s a different kind of humor than we normally experience to see the town Marshal arguing and negotiating terms with the rebel in logical discourse—while the gunfight is taking place!  Another feature that I fully appreciated is the inclusion of principles underlying revenge.  Revenge is sweet, but use your head!  The Marshal (Travolta) is wise in instructing his no-good son/deputy Gilly (Ransone) not to make another mistake in following someone “passing through” after having made a big one with him already.  Finally, it also illustrates how some people who, like Gilly, don’t hear good advice—such as “Get away from the window” during a gunfight.  West is a master, like Tarantino, in synthesizing violence with humor to make a point.
Ethan Hawke is coming more and more into his own as an actor and as filmmaker (Good Kill, Boyhood, the Richard Linklater series, and as director of a documentary, Seymour:  An Introduction).  Here, he plays Paul, a taciturn loner bound for Mexico with his beloved dog Abby.  He is not looking for a fight, but he knows how to defend himself.  Hawke seems to know this character deep down in his psyche; Paul has been reduced by trauma and guilt to talking mostly to his dog Abby (one of the stars in the film).  We hear of his past only in bits and pieces, usually when Mary Anne (Farmiga), the co-owner of the inn in town, forces it out of him.  But Paul is not only intelligent, he is well trained (something the Marshal recognizes, but his son doesn’t), quick, and sure in his reactions.
James Ransone makes an interesting bad guy; he has a handsome “Hollywood” face with beautiful eyes and an attractive dimple, but as his personality emerges, those characteristics become more and more sinister.  Taissa Farmiga and Karen Gillan look enough alike to be real sisters; in the movie they manage an inn while their father is dying in a bedroom.  They are chatterboxes—another clever idea by Ti West—but one is rather hysterical and the other more levelheaded and goal directed.  John Travolta is perfect for the role of town Marshal, and he makes the character much more complex and even appealing than is generally the case in westerns.
In a Valley of Violence was filmed in Santa Fe with its captivating landscapes by Cinematographer Eric Robbins.  His work enhances the mystery and action of the film.
In a Valley of Violence is about revenge, and challenges us to question the concept.  When is revenge justified?  Clearly, getting revenge for a narcissistic wound is likely to be foolhardy.  But when someone is unjustifiably cruel and likely to continue in it, we are likely to cheer, as when Paul vows, "Those men left me with nothing; I'm going to leave them with less."  Few of us are Gandhi.  Yet, even when it seems justified, revenge often results in unintended damage.

A finely crafted western outside the usual fare.