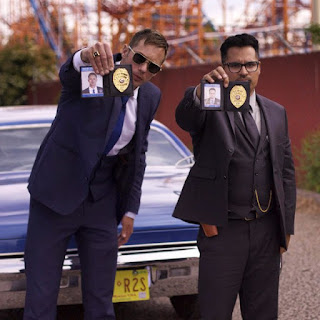 The talented British (Irish descent) brothers, John Michael (Calvary, The Guard) and Martin (Seven Psychopaths, In Bruges) McDonagh, write and direct edgy films that grab you emotionally, and simultaneously make social statements about the world we live in.  In War on Everyone John Michael presents a film shot in New Mexico about two rogue policemen who skirt the law and feel free to render justice as they see fit.
Bob Bolano (Pena) is the more levelheaded one who feels responsibility toward the more impulsive Terry (Skarsgard).  They share such a brotherly connection that Bob’s kids call Terry “Uncle Terry”.  By having these two officers take matters into their own hands at the risk of their careers, McDonagh will appeal to the sympathies of some viewers, those who have little investment in adherence to U. S. law and the Constitution, and perhaps as a reaction to recent reports of police misbehavior.
In this light, Bob and Terry have no compunction about demanding a percentage of the profit from criminals, and when Terry’s current love (Thompson) asks how he can afford such a nice house, he shrugs her off.  Both men regard possessions as disposable (when his son’s Xbox is thrown down and broken, Bob will simply demand another from one of his arrests), yet unlike religious figures who shun possessions on moral grounds, Bob and Terry seek the American dream of entitlement and ownership.  Pena and Skarsgard seem perfect for these roles, and make a good comedy team in their bumbling and Pena’s attempts to quote maxims and philosophies.
This film has major violence, which should be taken as symbolic more than as a recipe to follow.  When Bob and Terry take on wealthy James Mangan (Theo James), they encounter someone who has fewer scruples than they do, but they are determined to bring him down on their own, even though they’ve been suspended from the police force for their behavior.
Although John Michael McDonagh’s previous films have been some of my favorites, I don’t particularly care for this type of film in which policemen have no regard for their responsibility, and compete with criminals for the loot.  Perhaps I have taken it too seriously.
The music of Lorne Balfe, with the insertion of Glen Campbell ballads at pointed or random times lightens the experience of the film and made me smile.  Bob Bukowski’s cinematography is another characteristic that heightens the value of War on Everyone.

A surreal buddy-cop spoof on law enforcement in the U.S.