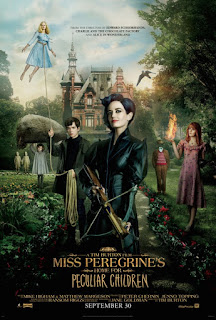 Jake (Butterfield) regards himself as just as ordinary kid, but his grandfather’s (Stamp) stories give a special boost to his life, informing him about other worlds and other times.  These are magical stories that he finds enchanting, but are discounted by his father (O’Dowd), a skeptical realist.  When something happens to his grandfather, Jake becomes disconsolate, and is taken to a psychiatrist (Janney).  Jake is trying to figure out what is real and what is not real, since he is apparently seeing things that aren’t really there.  His grandfather has told him stories about Miss Peregrine’s Home for Peculiar Children where he himself lived for a time as a child.  And he tells Jake at one point that he (Jake) should go there.  Jake thinks this is a great idea, and although his parents are doubtful, the psychiatrist points out how it might be helpful.
So Jake and his father, a bird watcher, head to the island off Wales.  Jake manages to get his father to go bird watching, while he goes on his own to explore the Home.  He does find it, and encounters a strange group of children (with special powers) and Miss Peregrine (Green) herself.  They seem to know who he is already and give him a warm welcome.  But just as his grandfather predicted, there are dangers afloat.  Jake is pulled into the struggle for survival, and in the process discovers things about himself that he never knew.
The film is classical Tim Burton with its magic and enchantment, marvelous special effects, and good messages and models for children.  Samuel L. Jackson makes a fearsome ogre that is not in the novel by Random Riggs on which the film is based, but added by Burton and Jane Goldman, the screenwriter.   It’s a good addition to give the film more focus.  Judi Dench plays a warm, special grandmother type with a kind of flighty personality, and she can transform into a bird.  Green is beautiful as Miss Peregrine with her obsession with timepieces and schedules, and her transformations are awesome and inspiring.
The child actors are very good and convincing as well.  Asa Butterfield is fresh in his approach as a wide-eyed teenager still capable of wonder, and Ella Purnell, a friend he meets at the Home, is delightful and skillful in her special powers.  Kids in the audience should enjoy watching children with special powers do their thing—blowing oceans away, starting fire with the flick of the wrist, floating in air, having the strength of three grown men, becoming invisible, able to throw out bees from inside oneself, wrapping cords of vines around a villain, and so on.
I also thought the metaphor of stealing people’s eyes—especially children’s—to gain power and eternal life was a clever idea, suggesting that vision is ever-renewing and keeps one informed and up-to-date in the world.
This is a film for those who are drawn to fantasy and super-human powers.  It could be too frightening in places for very small children, but otherwise, I think most kids will enjoy and be inspired by it.

Enchanting in its flights of fancy from a humanizing base.