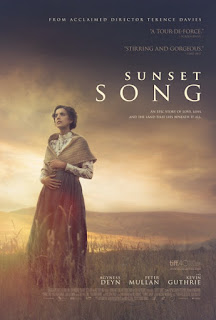 This beautifully filmed and well written film is like a dirge, a slow mournful composition, although there are segments that are happy and joyful.  The story opens in a schoolroom, and as two of the girls jostle their way home, one predicts for the other how her life will be, including her first kiss from a boy.  However, presently, at home Chris’ (Deyn) circumstances are radically different from the forecast, as the head of the household (Mullan) is a religious tyrant who forces his wife Jean (Nardini) to keep bearing five more children when she feels two are sufficient and mercilessly beats his son Will (Greenless) for the slightest infraction.  All this takes place just before the outbreak of WWI, when women had few rights.
After Chris’ mother finally rebels, her brother becomes so angry with his father he leaves home never to return.  Instead of going to college to become a teacher, the intelligent Chris stays home to help her cantankerous father with the farm.  The benefit is that she learns all about the trade, and when she is eventually left to run it, she is well prepared.  We have seen her transform from a fearful, compliant female pre-twentieth century, to a young woman who knows her mind and what she wants.
Next comes the segment where it looks like everything is going to work out well for Chris.  She has developed some spunk, and let her relatives know that she is fully capable of staying on the farm and managing her affairs.  She develops a relationship with Ewan (Guthrie), who is devoted, loving, and energetically helpful with the farm.  They have a whirlwind courtship and a celebratory wedding on New Year’s Eve, after which they settle into married bliss and welcome a new baby.
Then comes the war, and although Ewan and his friend Rob (Rankine) plan to stay out of it, they are taunted so badly as cowards, they end up enlisting, along with another friend Chae (Pirie).  The story goes dark again; Chris manages very well on the farm with her son and the help of a male friend.  But when Ewan comes home for a visit, he is a changed man, presumably an effect of war experiences—brutal, demanding, and boorish.  When he leaves to be shipped off to France, they do not say goodbye to each other.  He does not return, but his friend Chae informs her of what happened to him, which gives her some comfort.
Sunset Song is based on a well-known Scottish novel by Lewis Grassic Gibbon with screenplay and direction by Terence Davies (The House of Mirth, The Deep Blue Sea).  It is typical of Davies’ work in its characterization and referencing important issues of its time, such as women’s rights, pacifism against war, family dysfunction, and the ongoing modernization of society.  Gibbon meant for the title, Sunset Song, to reflect the end of an era giving way to a new.
The acting, cinematography (Michael McDonough), and music (Gast Waltzing) contribute significantly to the value of this film.

An in-depth look at life in Scotland pre-WWI, as shown through the eyes of a brave young woman.

Posted by donnarcopeland at 6:03 PM