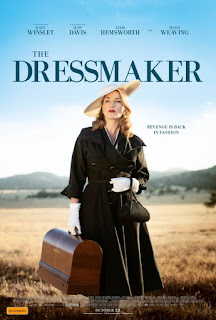 What a delightful mixture of farcical characters and predicaments blended in with psychological insight and truths about humans with all their flaws.  The Dressmaker is a parody about revenge and we laugh a lot, but it covers very serious issues and consequences as well, especially towards the end when historical truths come to light about the past that account for the nature of the relationships and events ongoing in a small town in Australia.
Tilly (Winslet) is sent to a boarding school when she is young and very rebellious and after she is associated with the death of another child.  But she has wits and talent and manages to escape the school and run to other countries, ending up in Paris at couture houses.  Her mother was a seamstress and had taught her the basics, which helps her initially, but she is able to soak up what she needs for couture designing in Paris.
Then she decides to go back to the old hometown.  Why?  Perhaps to take care of her aging mother (Davis), but their relationship was/is very stormy.  Gradually we learn that she is delving into past events that have made her feel cursed, and she hopes to get more information from her mother or anyone she can find.  But Mother is a cantankerous old shrew who claims not to know who Tilly is, and mainly echoes attitudes of townspeople toward Tilly.  But in order to get information, Tilly intuitively senses what will please people, and goes about giving them what they want to establish friendship and trust.
Enter handsome young hunk Teddy (Hemsworth) to shine a bright ray of sunshine into the dark, bitter landscape.  He is optimistic, patient, and has tolerance for others beyond what Tilly or her mother have ever known.  Tilly is gorgeous and flaunts it (actually in order to win over customers for her clothes), and he goes after her despite the fact that she is distracting to his soccer team.  She tries hard to reject him.
Meanwhile, Tilly is winning over the women in town by making them super attractive with her clothes.  Her tolerance of Sergeant Farrat’s idiosyncrasies and her friendship with him ultimately gives her important information about her past (which she cannot remember), and finally, Teddy’s younger brother’s critical observations give her the key to what she is looking for.
The Dressmaker is based on a novel by Rosalie Ham; the screenplay is by P.J. Hogan and the director Jocelyn Moorhouse.  How much the book is followed is not clear to me, but I think the structure of making the story kind of slapstick in the beginning and a bit toward the end, then getting into serious human issues successfully gets the point across about small towns, human foibles and motivations, and the heroics involved in overcoming petty—sometimes dangerous—stories that are spread with bad intentions.  David Hirschfelder inserts a generous blend of music from the 1950’s with strains that underscore emotional content.  Donald McAlpine’s cinematography had me from the beginning with the textured shots of the landscape, introducing the mood of the film.
Kate Winslet brilliantly (as usual) captures the complex character of Tilly with its multi-faceted blends of goodness, guilt, hatred, outrage, and flair.  She draws us to her, shocks us with some of her actions, makes us chuckle with her wit, then pulls our heartstrings for what she has endured.  Judy Davis has earned every accolade she has received, and steals the show many times with her rendition of a feisty old woman who is always looking for love and acceptance—but is not too good at obtaining it.  Liam Hemsworth captures the Panglossian attitude that Tilly and her mother need to pull them out of their bitterness.  The film is ingenious in the way it has Teddy appeal to both Tilly and her mother.
The Dressmaker was a complete surprise to me, although I generally favor Australian films.  I had not expected how entertainingly funny it is, or the depth of the psychological portrayal of characters.

You can go see this film as an antidote to current day trauma and worries.  It will make you laugh, but think and feel as well.

Posted by donnarcopeland at 8:40 AM