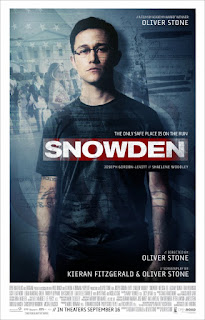 Oliver Stone and his co-writer Kieran Fitzgerald present a close-up look at the man who successfully blew the whistle on the U.S. Government for what he terms “running a dragnet on the whole world” by “tracking every cell phone.”  He says that terrorism is really an excuse for acquiring economic and social control for the supremacy of the U.S. Government.  We learn that there is a wide network of surveillance that encompasses the whole world, including friendly allies and virtually everyone in our own country.
Who is Edward Snowden?  In the process of hearing about his life and his accomplishments, our respect for him grows.  He is articulate in expressing his observations, was a star player in his advancement through government posts by virtue of his intelligence and hard work, and regarded as one who is conscientious, questioning, and honorable in his values.  He made numerous attempts to give service to his country, but each time he encountered evidence of wrongdoing on the part of the NSA and CIA, it was a challenge to his conscience.  He tried to express his concerns to his mentor, Corbin O’Brian, the deputy head of the NSA, but was given rationalizations for the government’s going against the Constitution.  Finally, at great sacrifice of his personal life, he decided he needed to let the American people know what was going on.
It’s a matter of historical record—and Snowden was actually warned of this—that previous whistleblowers like Thomas Drake and Bill Binney were severely punished for trying to go through proper channels in expressing the same concerns as Snowden.  It ruined their lives and their careers because they didn’t have concrete “proof” of their allegations.  That is why Snowden did not make a formal complaint and made sure he had the proof of his allegations; and so he is charged with “stealing” classified documents.
Snowden carefully plotted how he would proceed, which was to fly to Hong Kong, contact a documentarian, Laura Poitras (Leo) and newspaper reporters from London’s Guardian, give them his information, and trust them to analyze and publicize it at their discretion.  As we all know, his plan after that was to fly to Moscow, then Cuba, then to Ecuador for asylum; however, the U.S. withdrew his passport, and he has been in Moscow ever since 2013.
Stone wisely inserted into the story Snowden’s personal relationship with his girlfriend Lindsay (Woodley).  This serves several purposes; namely to fill out the picture of Snowden and show his human normalcy and the significant influence of Lindsay on his life and balance the wealth of technical information the viewer must process during the film with a real love story.
Gordon-Levitt is award-worthy in his capturing the look and essence of Snowden, and Woodley gives her character Lindsay life that shows smartness, spunk, and curiosity.  They have wonderful chemistry in showing how this couple has remained together to this day, despite countless separations and pressures.  Ifans, Cage, Leo, Wilkinson, and Quinto are incredibly good supporting actors that help elevate the quality of Snowden.
My problem with the film is its lack of chronology.  It seems to be a fad among filmmakers today to jump around in time.  There is some sequencing of Snowden’s jobs, but seemingly at random, we go back and forth between Hong Kong, Snowden’s relationship with Lindsay, CIA operations, Geneva, Tokyo, and Oahu.  I see no reason for this, and feel jerked around.
After the screening I attended, we were treated to a live broadcast of a conversation with Snowden (via satellite from Moscow), and the filmmakers Oliver Stone, Joseph Gordon-Levitt, and Shailene Woodley, hosted by Matt Zoller Seitz (Editor-in-Chief RogerEbert.com and author of The Oliver Stone Experience).
In this, Edward Snowden gives us further proof of his character, saying that it’s obvious that he is “the world’s worst boyfriend.”  In the film, he and Lindsay have many conflicts about his official need for secrecy, his absences, and his preoccupation with his job.  Each time it looks like they’re about to have a normal life, he gets another offer of a position he can’t turn down.  At one point he says wistfully, “Lots of people cruise happily through life; why can’t I?”  He pays tribute to Lindsay in the televised conversation, acknowledging that she is stronger than he is.
Oliver Stone elaborated on how the film got off the ground.  He had nine visits in Moscow with Snowden before they agreed to proceed.  He pointed out how much technical information he had to process, the wariness of Snowden which made Stone wonder if he would cooperate, and the time it took for them to develop mutual trust.  Snowden said he was impressed with Stone’s complete concentration and attention to detail on a project; “He was consumed with it”, he said.
Gordon-Levitt and Woodley touched on the challenges and fulfillment of extreme emotional scenes and the rigor of multiple takes of the material.  Woodley commented on the media’s treatment of Lindsay after the announcement of Snowden’s defection, acknowledging that the pictures of her on the Internet were one-dimensional and stereotypical, whereas she is in fact a woman of depth and talent.  Gordon-Levitt expressed the gratification he felt when Snowden’s family attended the movie’s premiere in New York and thanked him—the best feedback he has ever gotten, he says.
Finally, Snowden addressed the question of “I don’t have anything to hide, so I don’t care if the government monitors my phone calls, e-mails, and Internet posts.”  He said that “privacy is the fountainhead of all other rights”, so we should be mindful of what it means to lose that privacy.  He urged everyone to start at the local level in advocating for it, discuss it openly with others, and unite in efforts to let the government know we are against universal surveillance without cause.

A must-see for everyone who values their freedom.

Posted by donnarcopeland at 11:32 PM