THE LOVERS AND THE DESPOT 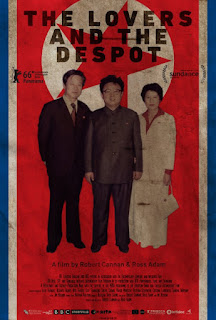 A most amazing story!  And if there are skeptics, that’s understandable.  Nevertheless, after listening to This American Life’s (Podcast #556) reporting on this story last year, as well as the audiotapes obtained by the lovers, I’m inclined to believe it.  Kim Jong-il apparently had a rough childhood in the sense that he had every toy imaginable, but could not play with other children.  He grew up isolated (not surprising that he turned out to be a movie enthusiast), shy, and short—very unlike his charismatic father.  But he was indulged, and was given anything material he asked for.  So he grew up getting whatever he wanted; why not moviemakers too?
In 1978, a famous movie star in South Korea went missing when she was visiting Hong Kong.  Soon afterward, her ex-husband, film director Shin Sang-ok, went missing as well when he was searching for her in Hong Kong.  The first kidnapping is generally accepted as valid, but there are those who are skeptical about Shin’s story, in that he had always had money problems with his film company and the conservative, censoring government had taken away his permit to film altogether.  Several years later, when he and his wife began to appear at film festivals with their North Korean financed films, it appeared that they had been “bought off” by Kim Jong-il, a passionate film enthusiast who complained about his country’s film industry.
This documentary by British filmmakers Ross Adam and Robert Cannan is a coherent and well-documented account of the remarkable story.  Although they don’t give a final pronouncement of the validity of the couple’s claim, they did gather material from personal interviews with Choi (Shin died in 2006), their two children, and U.S. officials (one of which was Michael Yi, a native Korean previously working at a military intelligence organization in South Korea and later as a classified U.S. intelligence officer charged with interrogating North Korean defectors and arresting North Korean espionage agents); news materials from the time; and clips from the couple’s films (seven of which were made in less than three years in North Korea), which enhance the documentary’s appeal.

Finally, anticipating that their story would be questioned, Choi and Shin cleverly sneaked a tape recorder into one of their meetings with Kim Jong-il, in which he basically acknowledged he had them kidnapped for the purpose of elevating the North Korean film industry.  (He never did get the connection between government repression and the North’s unimaginative, boring films.)  This recording is played in the film, with Yi, the U.S. intelligence officer verifying Kim’s voice.
Considering all of this together, it appears to me that Adam and Cannan did due diligence in collecting the facts of the case, and we do know that after the couple suddenly appeared at the U.S. Embassy in Vienna and given asylum by the U.S., they were interrogated thoroughly and the validity of their claims was established.
The documentary does intersperse dramatizations of scenes in the movie, and it is not always clear which ones they are and which are actual, for which Adam and Cannan could be criticized.  They do a good job of showing the lives of Shin, Choi and Kim Jong-il prior to the kidnapping, which sheds some light on how and why their paths intersected, but could have addressed more directly the question of whether Shin was abducted against his will.   However, the fact that he was placed in a detention facility for months and punished severely for attempts to escape with signs of starvation apparent, suggests that his wasn’t a friendly crossing over.  Choi was aghast when she saw him for the first time in North Korea, prompting her to ask, “What happened to you?!”
As strange as this story is, we shouldn’t underestimate a dictator nor the ingenuity of people wanting freedom.  After eight years of a surreal experience involving the best and the worst, the couple end up valuing freedom above all else.

An inspiring story about ingenuity and knowing what it takes to survive in a paradoxical world.