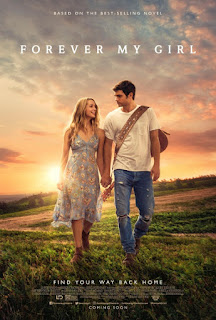 This story is rather like a fairy tale that resembles an adolescent girl’s fantasy, starting out with a tragic jilting at the altar, then moving to the would-be groom’s country music career and fame on the road, and on to regrets and efforts to atone.  The film is written and directed by Bethany Ashton Wolf, based on a novel by Heidi McLaughlin, an author who writes about how people can “find their relationship with God and each other…[her] passion emerged through her personal discovery of how God’s love heals and restores all our brokenness” (information from a search of “Heidi McLaughlin”).
The film opens with the bride Josie (Rothe) at the church waiting to go down the aisle when she receives word that Liam (Roe) is not going to appear.  No explanation is given, but he is shown performing country music at concerts, followed by hordes of young people, so we assume that he has chosen that lifestyle over being tied down in St. Augustine, Louisiana, with his high school girlfriend.
Eight years transpire, and it is clear that Liam has become an over-indulged star whose every whim is catered to and every need taken care of by his staff, largely his agent Sam (Cambor).  Two incidents draw him back home:  Damage to his precious cell phone that he has kept for years and news that his best friend from school was killed.  We find out later why that phone is so important.
At any rate, he impulsively runs to the funeral, abandoning his music tour, and of course crosses paths with his jilted sweetheart Josie.  There, he learns of some shocking news that could potentially change his life forever.  It prompts him to remain in his hometown for a while, staying with his widowed father, who is Pastor Brian (Hickey) at the community church.
Never underestimate the ire of a small town when someone has transgressed, and that ire is what Liam faces when he returns home.  He gets it from Josie (whom he clearly still holds a torch for), his father, Josie’s brother, and all the townspeople he meets.  But his father is a good Christian pastor, and soon preaches (apparently after wrestling with his own demons) about mercy and forgiveness.  Liam will not have an easy time of it, proving how hard it is to overcome a bad reputation, but he handles it with humility and grace—making a few mistakes here and there—and learning that money is not necessarily a motivator for everyone.  The rest of the fairy tale spins out largely as expected, particularly in consideration of the principles of the novel’s author.
The film is well directed and the actors are skilled, particularly Hickey, who has to portray someone with a son he loves but gives him grief, a pastor who must comfort others, and ultimately, show that he can see his son in a different light.  Alex Roe and Jessica Rothe as the leads do well individually, but the chemistry between them is less convincing.
Along with the day-dream-like script, I had a big problem with the lines written for Josie’s daughter Billy (Fortson).  The actress was great, but there is no way a seven-year-old would say things like, “You two weren’t exactly subtle, if you know what I mean” and we should “help him process the news.”  Nor would she be likely to reproduce some guitar riffs after seeing them for the first time, without any previous training on the guitar.

This is a film for fairy tale lovers.

Posted by donnarcopeland at 10:48 AM