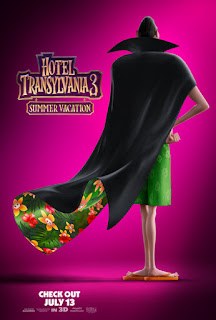 For a little background information, Dracula (Sandler) is a widower with a grown-up daughter called Mavis (Gomez) who has decided they both need some R&R and more family time.  So for a surprise, she has arranged for all of them to go on a trip, without telling them it will be a cruise—which Drac would never agree to beforehand. Their party will consist of Mavis’ human husband Johnny (Samberg), and their child Dennis (Asher Blinkoff)—along with a trail of friends:  Wayne (Buscemi), Griffin (Spade), Frank (James), and others.
They go on a harrowing plane trip, and are dropped off in the Bermuda Triangle (a place where only the adults will sense the danger), where they board the ship, the Legacy.  (The name is something of a pun in that Drac and the Van Helsing families have been archenemies for generations, and both have an interest in continuing their legacy.)  Drac has had a lot of anxiety about the trip, and Mavis has wisely kept the cruise as a surprise. Now, it’s all she can do to convince him to board the ship for the sake of the family.
Drac goes into a funk because he hates being on a boat.  In his despair, he has given up on having the “zing”, thinking one can only experience that once in a lifetime, and he had that with his wife. So, of course, much to his surprise, when the captain of the ship, Ericka (Gomez), appears, his heart goes thumpedy-thump, and he gets the zing.
The thrills and chills of the story will stem from Erica’s heritage:  Her great grandfather is a Van Helsing, and he is on board the ship and counting on her to use the stowed away “instrument of destruction” to do away with Drac.  From what her ancestors have told her, Erika is already chomping away at the bit to do away with him, is delighted when she sees he is attracted to her, and begins to plot his demise.  But Van Helsing instructs her to wait until she can use the special instrument. She proceeds anyway to try to do him in, but neither she nor her great grandfather have anticipated the power of the zing.
Sony Pictures has created an impressive production design and animation with special effects, and there is a lot of cartoon-like action throughout the film, which will please many viewers.  I thought it odd, though, that for a children’s movie, the thrust of the story would be about love, murder, and generational grudges—more adult-type of subjects.  It does end with a positive message about acceptance of differences and the unity that should exist among all living beings on earth—whether human, animal, monster, or whatever.  And this is done cleverly with music from three songs (“Good Vibrations”, Don’t Worry; Be Happy”, and “Hey Macarena”).  Everyone should have an opportunity to experience the zing.

Summer vacation can mean many things, including one with monsters aboard a cruise ship.

Posted by donnarcopeland at 10:54 AM