TEEN TITANS GO! TO THE MOVIES 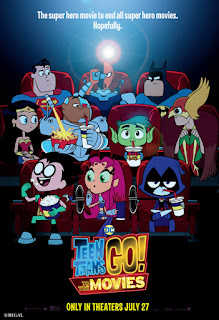 In our narcissistic age, it’s fitting that we have more films for kids about its consequences, particularly when Hollywood has such a draw.  This animated film is about a “sidekick, a nobody” who has aspirations for greatness like the known superheroes enjoy.  Robin (Menville) is chafing about his insignificance in the superhero world, and his team’s references to his small hands only makes it worse.  (Wonder where the filmmakers got the idea that small hands has some significance in a film about hubris…)  So he begins to whip up enthusiasm among his team of Teen Titans, consisting of Raven (Strong), Cyborg (Payton), Starfire (Walch), and Beast Boy (Cipes), for making a superhero movie with them as stars.
They proceed to Hollywood with high hopes of getting a contract, and wonder about who would be their nemesis, which all superheroes have.  Not surprisingly, one appears in the form of Slade (pronounced ‘slade-a’ to give it more oomph and voiced by Arnett). His power is in mind manipulation, and we see all kinds of manifestations of that in the story, except those times when Robin is onto him and doesn’t succumb to some of his mis-directions.  But Robin is susceptible to thinking about his own interests without regard to his team.  He keeps chanting that he wants “a movie all about me.”
In the meantime, the Titans go to Warner Brothers and try to enlist the interest of director Jane Wilson (Bell).  [As an aside, much of this film is spoofing not only Hollywood, but superhero films in general, and this includes DC and Marvel comics.  Stan Lee of Marvel Comics has two wonderful cameos.] Wilson comes across as a caricature of director stereotypes, dismissing the Titans initially for their inconsequentiality.
Eventually, though, the movie will get made, but at considerable cost; Robin will have to make compromises (like dispensing with his team) and learn a life lesson—one that will be to the edification of children in the audience.
Clever references to previous superhero movies will please those knowledgeable about DC and Marvel Comics.  At one point when Robin wants to take him in, Slade reminds him that superheroes’ archenemies never go to jail—instead, their next plan gets foiled in the next movie by a superhero.
Teen Titans is clearly geared toward children, both in its humor (yes, farts and poops) and in its attempts to convey good principles such as thoughtfulness toward others and the pitfalls of pride. But with its running commentary on super hero figures and the comics behind them, it’s entertaining for adults as well, particularly those familiar with the genre.
The core group responsible for the “Teen Titans Go!” TV series are at work in the movie version as well, for instance, directors Aaron Horvath and Peter Rida, production designer Dan Hipp, and musician Jared Faber.  The design, animation, and graphics match up nicely with the action, creating a unified whole.  Actors’ voices are apt for their parts, and special shout-outs go to Scott Menville as Robin and Will Arnett as Slade who are onscreen the majority of the time.

High Jinks and fanciful animations keep this production entertaining for children and adults.

Posted by donnarcopeland at 1:35 PM