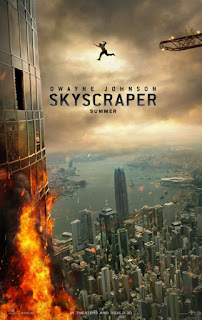 Stay away if you have vertigo; The Pearl Hotel is 3,000 feet high.  A large pearl (curiously resembling a baseball) rests delicately at the very top. When the architect/owner Zhao Long Ji (Han) takes his new building security expert (Johnson) on a tour, they pass through architecturally stunning halls, some with optical illusions, such as a room with dozens of reflecting mirrors, and end up on what appears to be the top of the city of Hong Kong—a “bit of heaven”, the owner comments.  They are walking on what appears to be a glass pane that covers the entire city.  It’s digital within a digital movie.
The story is set up cleverly with scenes from 10 years earlier in Minnesota when Will Sawyer (Johnson) is with the FBI, which gives us the antecedents to the events that are about to occur.  Now, Will is excited and a bit nervous about interviewing for the job at the hotel.  After leaving the FBI, he has done well as a security analyst, and Zhao has asked him to inspect and review the systems he has had installed.
Unbeknownst to either of them, but soon to appear, are dangerous, ruthless saboteurs who will do their best to wreak havoc on the building, the people inside, and especially Zhao.  Eventually, of course, Sawyer will be drawn in and will entertain you with his harrowing feats and brushes with death by falling or burning or gunfire, all to try to rescue his wife and two children trapped in the burning hotel. It’s Dwayne in all his considerable glory.
To its credit, the film portrays the family as not only brave and heroic, but clever and wily in standing up to the bad guys.  Neve Campbell as Sarah, the mother, is given the opportunity to use her intelligence as a surgeon and as a shrewd woman to solve puzzles, even electronic ones.  The two children might be quaking, but they too are given actions that reflect bravery and quick thinking.  All this is in the midst of encountering an evil man (or woman) at every turn.  A cameo role for Hannah Quinlivan as Xia shows her talents for reflecting a cold, cunning Asian woman, robotic-like in fulfilling her assigned duties.
Skyscraper delivers on its promise of thrills and chills, impressive special effects, and Dwayne Johnson’s stunt capabilities. His long-time stunt man double is his cousin Tanoi Reed, but Johnson is proud to say that he performed one amazing leap on his own in Skyscraper.  (You’ll recognize it when you see it.)  But the movie is unremarkable in forging anything new in the genre, and it’s very clear how everything is going to turn out in the end.
Rawson Marshall Thurber, the writer and director, manages well a formulaic rendition of thrillers that are like a dime-a-dozen nowadays, complete with sequels in the offing.  (The dime-a-dozen is clearly an ironic metaphor for films that cost millions of dollars.)  We still have the ominous threat of Zhao Long Ji’s archenemy still lurking in the background.
<”pant!  pant!”>  I can hardly wait.
I think the movie achieves what it set out to do.

Dizzying heights are reached in this thrilling tale, although well-grounded viewers may not be transported.