SORRY TO BOTHER YOU 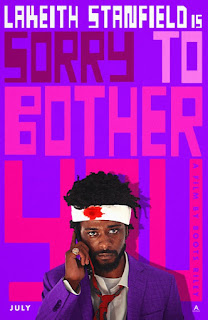 “Sorry to bother you” starts out with a telemarketer’s spiel to customers. Cassius Green (Stanfield) has to learn to stay on script and adopt a “white voice” so he will be successful and be promoted to “Power Caller.”  Cassius is starting out at the bottom, living in his uncle’s garage with his artist girlfriend Detroit (Thompson), where he is behind on his rent and driving a beat-up car given to him by the same uncle.  He has to make it at this job, not only to survive but just as much to preserve what little self esteem he has left.
He is naïve, and you wonder how he is going to make it at all, but he gets advice and encouragement from fellow workers like Langston (Glover) who clues him into adopting a white voice, Squeeze (Yeun) who is organizing a union, his friend Salvador (Fowler), and others.  Indeed, he does well and is promoted with much fanfare.
But there’s a mysterious air around the Power Caller work site situated beyond double gold elevator doors, and things get increasingly bizarre, starting off with the strange woman orienting him (note that she has to punch in about 50 numbers to get the elevator to rise—an example of the many clever little comedic frills inserted by writer-director Boots Riley).  Suddenly, Cassius has a new elegant apartment and car, and he gets completely preoccupied with his job, which is making increasing demands upon him.
This is where the movie turns really bizarre and presses on into the macabre. The head of the company, Steve Lift (Hammer), takes notice of Cassius, and invites him to his office with an offer almost impossible to refuse.  He simply has to commit for a certain period of time and agree to participate in the Worry Free company’s treatments and he will get a ginormous salary.  Worry Free has devised a way to make employees much more productive and submissive.  (The company won’t have to worry any more about the labor protests wreaking havoc in the city of Oakland at this moment.)  What helps Cassius make up his mind is what he encounters when he enters the wrong door to the men’s restroom. What he finds there is a preview of the ultimate outcome of Worry Free’s venture.
I found the story rather ho-hum in the beginning, as I could envision what Cassius was getting himself into, recognizing a kind of hope that is more than likely to turn into disillusionment.  The reason it is so easy to spot is the apt metaphors Boots Riley uses to depict the seduction of capitalistic companies that have little regard for humankind and quality of life.  I think about all those who have bought into corporate enticements only to discover there is a price they hadn’t expected.  (I got a special kick out of Lift’s promise that the “treatment” results in a huge organ--guess which one).  Riley creates a concrete example of the transformation that corporate ascenders experience as they rise up the ladder.  Of course, there is a message here that only some of us will appreciate.
Sorry to Bother You gives us a picture of the enticements of a kind of capitalism that is oblivious to human needs but is extremely seductive for the few who can actually reap huge benefits from it. It serves as a counterpart to Jordan Peele’s Get Out, in its references to genetic experimentation with individuals in the service of ulterior, selfish, and misguided interests.

Rescuing hope that’s on the road to disillusionment.

Posted by donnarcopeland at 11:09 AM