DON'T WORRY, HE WON'T GET FAR ON FOOT 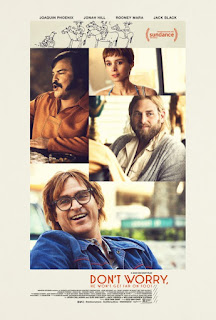 I have never given a high grade to a film that was so hard to watch.  Don’t Worry is hard to watch for its realism in depicting addiction and flogging one’s way through it to some kind of resolution.  I have to admit, I had to take breaks while seeing the screener sent to me at home.  For a long while, the viewer has little sympathy for its protagonist John Callahan, beautifully and perfectly rendered by Joaquin Phoenix.  He’s an alcoholic, self-centered, entitled, and dismissive of all rules.  He will get his comeuppance, though, from a car accident after a night of heavy drinking, after which his driver Dexter (played by the inimitable Jack Black in a chameleon role) walks away unscathed, and he becomes a quadriplegic.
The film is about what happens after that, which is a long, steep climb.  John is still bucking against society’s rules every step of the way when somehow he stumbles into an Alcoholics Anonymous meeting.  He’s a little taken aback, but the leader that day, Donnie (Hill), captures his attention. What follows is the expected journey of an alcoholic through all the steps of that organization, to forgiveness—of course, the hardest step of all.
Adopted at birth, John is poignant remembering three things he had learned about his mother:  She was Irish American, red-haired, a schoolteacher—and then the fourth thing:  “She didn’t want me.”  That made such an impression on him, he used it as an excuse to himself and to others for his behavior for years.  “I am an orphan”, he whines.  When he gets to AA, his claim is challenged, partly from questions he can’t answer and partly from stories that are obviously more tragic than his.
The film is a marvel—and unique—in its depiction of how groups like Alcoholics Anonymous work, in their tedious exploration of each person’s story, confrontation by peers, and wise observations of the leaders.  I was impressed by how so much of it rang true and how helpful  the feedback is from group participants and leaders, a rarity in Hollywood movies.  It shows not only the emotional journey, but as well, problems in dealing with administrative obstacles, including beneficiaries’ trying to exploit the system and myopia of those in charge, e.g., if one is earning money from cartoons, he/she should no longer be deserving of benefits.
Gus Van Sant has a reputation for making good movies that reflect social order, populist opinion, and dealing with political issues (Milk, Promised Land, Elephant).  He is good at getting down to the nitty-gritty and showing the fundamental premises.  Here, he shows sensitivity again in his understanding of the psychological underpinnings of addiction and what it takes to overcome its hold.
Phoenix is a natural for this kind of role (quirky and resistant, but thoughtful in the end), balanced well by Jonah Hill, slimmed down and in an unusual role for him of a guru-type of figure.  I did not buy the Rooney Mara figure of a stunningly beautiful woman who gives her all to someone like John Callahan. First of all, she is portrayed (although it is not clear) as some kind of therapist, who is so attracted to a man in a wheelchair she goes all in.  If that happened for real, I’m glad in a way, but if it is “added in” to the storyline as a come-on, I’m turned off.

A mostly inspiring story about an obnoxious man who was rehabilitated by life events.