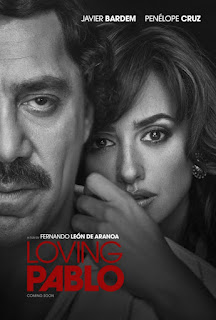 Despite its title, this film is not essentially about Pablo Escobar; based on the TV anchorwoman Virginia Vallejo’s memoir about her love affair with him, it covers her gradual realization of who he actually was and the ways in which their relationship affected her life.  In the beginning, she is so charmed by him and impressed with his philanthropic goals, she says to herself she doesn’t care how he makes his money.  But after his dangerous operations become more and more obvious, disillusion sets in.
My understanding of the public’s continual fascination with Escobar through the years (as shown by the popularity of movies and TV series about him—such as El Patron, Paradise Lost, The Infiltrator, and Narcos, as well as more than 15 books—has more to do with interest in the risky business of selling drugs—especially in a cartel—rather than in the man himself.  Penelope Cruz as Virginia narrates much of the film in a voice-over, so it is clearly from her point of view.
In this sense, Loving Pablo falls far short of previous renditions of the famed drug lord because it really is about the romance, and doesn’t get much into Pablo’s business dealings.  There are definitely very violent scenes (and one notable distribution scene that takes place on a blocked highway) meant primarily to illustrate what made Virginia Vallejo anxious, but these scenes are not explained very well, and Pablo (Bardem) is shown much of the time as a passionate lover and family man and his brief flirtation with politics.
The affair lasted for five years, but the movie omits some events and insights that could have made it more compelling.  For instance, there was the impression that Escobar was using Vallejo’s television popularity to advance his standing in the country and provide him with a philanthropic cover to conceal his drug dealing.  Second, one reason for their break-up was his becoming so incensed when he learned that she had other lovers, he refused to see her again despite her wish to reunite.  Finally, little is made of the fact that Escobar was married, although there are a couple of scenes where his wife expresses her discontent with the situation.
As an account of an extra-marital romance, there is little of interest here, so viewers expecting more of the Pablo Escobar story will be disappointed.  As fine actors, Bardem and Cruz elevate the film to make it a little more entertaining, but there is not much of a reason to see the film.

Pablo Escobar’s five-year romance with a popular television personality and what came of it.