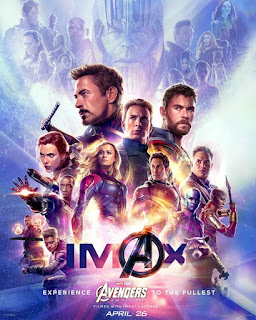 Endgame is quite the finale to Marvel Comics’ Avengers series.  The creators (Anthony and Joe Russo, directors) manage to reprise almost all the roles in previous films, and there are reunions as touching and significant as the beginning of this last season of HBO’s “Game of Thrones.” The film starts with an eerie reminder of Thanos’ (Brolin) intentions in Infinity Wars (to destroy half the people on earth to deal with over-population) by showing Hawkeye (Renner) training a young woman in shooting arrows while his wife calls on family members for a picnic lunch.  Suddenly, everyone but Hawkeye disappears.
Five years later, some of the Avengers are congregating to come up with a solution. But part of the problem is that some have become content; for instance, Tony Stark (Downey) is basking in family life with Pepper Potts (Paltrow) and their young daughter Morgan.  When some of the others—specifically Banner/Hulk (Ruffalo)—think they have the solution:  A time machine that will take them back to the time before Thanos stole the stones, retrieve them, and use them to get back the people destroyed and create a different world.
They have a difficult time rousing Stark/Iron Man from his contentment and risk losing those he holds most dear; but, of course, the whiff of a challenge and an adventure reels him in.  From then on, a full contingent of the Avengers [Iron Man, Hulk, Captain America (Evans), Thor (Hemsworth), Black Widow (Johansson), Ant-Man (Rudd), and Hawkeye] test and use their knowledge of time travel to reverse Thanos’ delusional plan.
They are indeed able to travel back in time, but it won’t be as simple as they expect. There will be many reunions, but the Avengers will encounter some of the same challenges they thought were over. The special effects for time travel will be a highlight of this story.  The viewer experiences just exactly what we imagine it would be like if we were so privileged.
Then, when you get to what looks like the last big battle (and it goes go on and on), don’t settle back in your chair or get ready to leave; much more is coming to create a satisfying conclusion in terms of closure—not necessarily satisfaction with what does occur.
As with most Marvel Comics movies, this one is overly long, bloated by the obligatory fight scene toward the end, and of course a fistfight scene is required as always.  But in its favor, the story is exciting and suspenseful; the special effects outstanding; and the humor almost always really  funny.  Also, women have stronger roles than in the past.

Endgame is a worthy conclusion to the Avengers series.