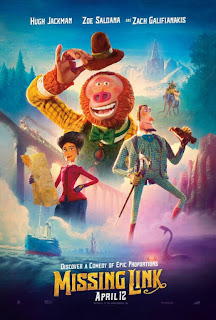 Laika Entertainment Production Company is developing a notable reputation for its production design and animation that enliven well-conceived stories and get the viewers’ rapt attention.  Writer/director Chris Butler (Kubo and the Two Strings, Coraline, ParaNorman) and production designer Lou Romano wow us again with artistically drawn images and sets and with a tale full of suspense and adventure (along with some chuckles—e.g., the panicked call that “The people we don’t want here are leaving!”).
Sir Lionel Frost (Jackman) is trying valiantly to achieve a reputation as an adventurer and discoverer of anthropological links heretofore (late 19thCentury) unknown. He has received some recognition, but wants the London scientific society to endorse him.  Well, Lord Piggot-Dunceb, head of the society is trying desperately to hold onto the old, standard ways—e.g., that man descended only from great statesmen (not apes, for goodness sakes!), and none of this includes women, etc. But Frost gets Lord Piggot to agree to a bet, that he can prove the existence of an entirely new evolutionary branch, after which he will be accepted into the Society.
From there, we accompany Frost on a series of adventures—finding the “missing link” in Washington State [an enormous being (Galifianakis) that measures up to Frost’s exact measurements], locating the map to the Himalayan Yetis where “Mr. Link” thinks his ancestors reside—and fulfilling Mr. Link’s desires to rejoin who he thinks are his ancestors.  But a number of obstacles will stand in the way.  First of all, they have to find the map of Sir Frost’s and his previous colleague, Aldous Fortnight’s, joint exploration into the Himalayas looking for the Yetis.
This brings him into a confrontation with Aldous’s widow, Adelina.  She’s not disposed to Sir Frost because of their prior association, and refuses to give him the map at first.  Then, when he steals it, she decides she could be useful in the effort and insists on joining the party.
To add to the intrigue, Lord Piggot has hired a nefarious character, Stenk (Olyphant) to get rid of Foster by any means possible.  He appears and reappears throughout the adventurers’ pursuits, on the scene to the very end, trying to do away with Frost.  The most spectacular and tense scenes come at the end when characters are hanging onto ropes and pickaxes to save themselves.
The story makes good points in exposing the sometimes underbelly of scientific research—self-serving pride and recognition, exploitation of subjects studied and lack of concern/respect for them.  It pays homage to women who follow men, but have the fortitude ultimately to pursue their own interests.  Most notably, it avoided the obvious pull for a romantic relationship, an expected and tired trope.

A beautifully told story about dedication, commitment, and good will.

Posted by donnarcopeland at 9:01 PM