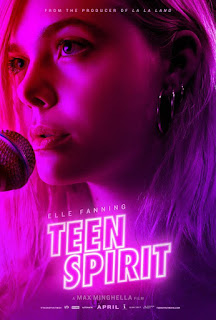 Isle of Wight farm girl meets the British entertainment industry in a singing competition…and you can just about fill in the blanks from there.  Elle Fanning as Violet looks like she belongs on the farm with her animals and her mother (Grochowska); she works part-time at an eatery, and sings at a local bar on the weekends.  She hears about the competition from friends at school, and decides to enter.  She’s young, though, and has to have a guardian sign for her when she is allowed to go to the second stage.  Her mother is not exactly enthusiastic about her singing, so Violet asks a fan at her night gig if he will vouch for her.  He has given her a lift home one evening when she was skittish about taking the bus.
It turns out that Vlad (Zlatko) is a former opera star and immediately starts negotiating to be her manager, promising he can also coach her in singing.  As to be expected, she nods OK, and focuses primarily on her current need for a “guardian.”  He will be helpful in her singing; she had been told at the first of the three auditions that, “You have a nice voice, but you need to work on everything else.”  He coaches her on breathing and other exercises, and she diligently practices.
The set-up for the story turns out to be the most interesting aspect of a film that later spins into the predictable.  Teen Spirit has other factors of strength, however.  In one of his first directing endeavors, Max Minghella, an actor, shows promise in his keen eye, pacing, and dramatic flair.  Greatly enhancing his efforts, Cam McLauchlin’s artistic editing provides a wealth of background information, peripheral action going on in scenes, and a full picture of a particular performance, all while focusing on the primary action.  Much of this begins with Autumn Durald’s imaginative cinematography with its striking shots and elaborate “footwork.”  This is about music, and Marius De Vries (with previous works including La La Land and Moulin Rouge) comes through with evocative songs and instrumental music.
Elle Fanning is well regarded for her work in Super 8, Ginger & Rosa,The Boxtrolls, and Maleficient.  She shows her talent here too, with singing (as in Boxtrolls) as an additional bonus.  Her acting range is highlighted in this film as a simple farm girl who loves her horse, has conflicts with her mother, bonds with a grandfatherly mentor, has aspirations that spur her on, and knocks it out of the park in her singing auditions/competitions.  She's a great singer.
Despite all these strengths, Teen Spirit’s screenplay by Minghella seems to me to be its weakest link, simply because not much that is truly creative is added to a well-known story.

This is a story that begins with promise, but devolves into the expected, despite a considerable amount of talent in the overall production.