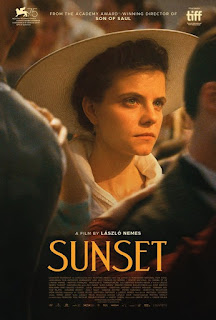 This period drama set in Hungary just before World War I contains no discernable plot, although it continuously gives the viewer the sense that something really big is going on or about to happen.  The protagonist Irisz (Jakab) has returned to Budapest to her parents’ old hat shop (actually, a high-end millinery), but she is not a welcome presence, and the current owner Mr. Brill (Ivanov) not only refuses to hire her, but tries to get her to leave.  In fact, many of the characters (whom we’re never made privy to just who they are) urge her to leave.  Undeterred, Irisz persists in being the detective who discovers what mysterious things are going on and who is responsible.  She is shoved around, attacked, and warned over and over, takes considerable risks—especially toward the end—but, viewer, don’t look for a satisfying ending in which everything will become clear.
We get that the parents’ store burned down and that they have died—although we never really learn why—and that Irisz was sent to an orphanage and had/has a brother with a bad reputation.  Although she desperately tries to find out more about him and actually find him—and there is evidence he has been around—people don’t seem to want to give her details.  There is an implied sense of “The past is passed; move on.”
Cinematography by Matyas Erdely is elegant, with fancy camera work throughout, which compensates somewhat for the weakness in storyline.  Music by Laszlo Melis is likewise beautiful and reflective of the period.  Although Juli Jakab is onscreen virtually all the time, her character is not intended to be expressive, so we primarily see her looking, wandering around, and asking curt questions (“Have you seen Mr. Leiter?”), which no one ever seems to answer directly, and instead try to shut her up.
Although director Laslo Nemes’ previous film, Son of Saul, was so well received it won an Oscar, it also had some of the characteristics as Sunset; i.e., the viewer is expected to infer plot details from minimal information.  But it wasn’t quite as opaque as this production. Nemes seems to prefer an impressionist approach to filmmaking, expecting the viewer to supply structure and details to the story.  So he shows us an impressionist painting of Irisz, but we’re not told much about who she is, where she came from, and what she is about.      Yes, we realize she wants to find out more about her family in her quest for identity, but we’re never shown the motivation behind it.  For these reasons, I regard Nemes as a purposefully withholding filmmaker, although others might better appreciate his subtlety.