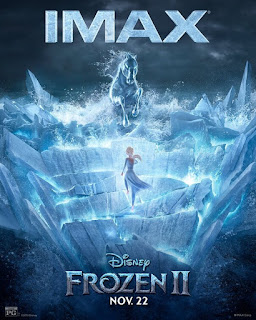 Frozen II is enchanting in the way fairytales are supposed to be, with thrilling visual effects, inspiring story, and imaginative characters—some endearing, some fearful, and some odious.  The film jumps back to when Elsa and Anna are children, and their father tells them the story of Arendelle and his role in it. Arendelle was friendly to another group in the Enchanted Forest and things were peaceful, until something happened to put them at war with each other.  This caused the four spirits of Air, Water, Fire, and Earth to create an impenetrable mist to descend on the forest, so that neither group could live there any more.
Jump forward to the present when sisters Elsa (Menzel) and Anna (Bell) are grown up and thriving in their beloved Arendelle.  But Elsa, who has special powers with ice and snow, starts hearing voices in song calling to her.  She eventually feels it so strongly, that she is determined to enter the Enchanted Forest (described to her by her father) now covered in mist. Anna begs to go with her, and she finally relents, but suddenly, Kristoff (Groff)—trying desperately to protect Anna—riding on Sven the reindeer, and Olaf (Gad) the snowman are in the entourage.
On the treacherous journey, they’ll encounter numerous obstacles that will test their courage and strength.  Right off the bat, when a few try to penetrate the mist, they are abruptly thrown back on their rears.  They will have to go through the spirits of air, water, fire, and earth and use them to their advantage in order to get the answer they’re seeking and return home.
At one point, Elsa decides she has to persist on her own, and takes off, leaving the others behind.  After forging through harrowing obstacles, she encounters family members of the past, learns crucial information about what happened, and solves the problem.  Not without her sister, however; one point of the story is the importance of working together and communicating to one another.
I imagine that most children will love this story, and it has many gems for them about the importance of history, human needs for family and friends and their communication and cooperation in achieving tasks, and the value of hope.
Frozen II, like the previous Frozen, is a musical, with characters breaking out into song, always expressing the character’s experience and furthering the story.  Christophe Beck, composer, has played an essential role in this, which is one of the eloquent aspects of the story.  All the writers (directors Chris Buck and Jennifer Lee, Kristen Anderson-Lopez, Robert Lopez, Allison Schroeder, and Marc Smith) deserve artistic credit for weaving a captivating story with heart and soul.

Do take your children/grandchildren to see Frozen II to delight, inspire, and thrill them.