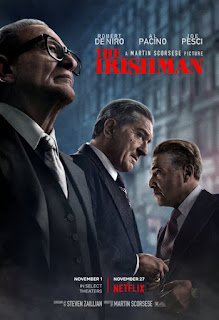 Martin Scorsese and screenwriter Steven Zaillian used Charles Brandt’s book as the primary source for the movie.  Typical of Scorsese, the story takes 3½ hours to tell.  I was surprised that it held my interest the entire time, which is a testament to the fine storytelling and acting.  I have not read the book, which Brandt wrote [I Heard You Paint Houses, 2004, after he interviewed Frank Sheeran (played by De Niro) at the end of his life]; but the film is convincing in describing the different groups and characters involved in the whole Jimmy Hoffa (played by Al Pacino) mystery and intrigue.
In the film, Frank delivers meat to restaurants for a living.  When he is accused of stealing some of it, his lawyer, who has connections with a mob, gets him off, and thus begins Frank’s budding career in doing favors for crime bosses Russell Bufalino (Pesci) and Angelo Bruno (Keitel).  Then, Russell tells Frank that Hoffa is interested in him, and Hoffa uses him as his right-hand man for years, sometimes putting Frank between him and Russell.  Frank’s delicately stepping through these waters is something to see and admire.
Al Pacino as Hoffa stands out as a highly complex figure whose strength is in reading people; this puts him in a slightly paranoid stance at times, but he is often right; and this is a fine line for an actor to pull off.  Robert De Niro shines as the star of the film, showing his sincere loyalties, his ambivalences, and his measured approach to any difficult situation.  His character’s face is impassive, revealing little of what he is thinking, which makes it a somewhat easier role, perhaps.  Joe Pesci is able to show the power of persuasion that Russell has in getting so many people to do his bidding, including Sheeran, involving him in fundamental betrayals.
The movie goes into details about the struggles between the unions at the time and big business and government, a time when the unions have been victorious, but whose leaders are now in bed with the mob and cavalierly using workers’ pension money in their own games of roulette.  A schism develops between Hoffa and Russell specifically around their differing views of the Kennedys, particularly toward the Attorney General, Robert Kennedy, who is bringing cases against them both of them and the Teamsters, which ultimately triangulates Frank and tests his loyalties.
Scorsese lives up to his reputation for composing and orchestrating a major production with precision, excellent casting, and editing.  Music by Robbie Robertson and production design by Bob Shaw help create the essentials in mood and look of the 1950’s. Spanning a period of 40 years, using aging techniques for the actors’ appearance is impressive.
That being said, I personally would have preferred a more abbreviated version of the story, as noted by others.  In my opinion, the 3½-hour length could have been reduced without sacrificing the quality of filmmaking.

Unless you’re a diehard crime story enthusiast who much prefers a big screen, I suggest you wait for the Netflix edition of The Irishman premiering on November 15.