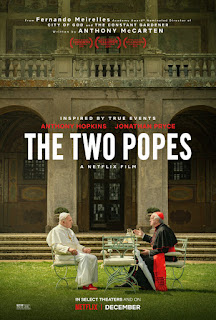 It’s fascinating to hear two popes we’ve all seen on television having intimate conversations about their lives and about the Church, and showing in detail how the transition between the two leaders came about.  They met three times in the Vatican before the transfer of the papacy from Benedict to Francis.  Anthony McCarten based his script on his book, written after careful research and interviews with both popes (both of whom live in the Vatican). Director Fernando Meirelles says that all the lines in the script come from these interviews or conversations reported in the book.  It should be noted that the actual meetings are not likely to have taken place.  This is a dramatization based on McCarten’s work.
But because the dialog is based on interviews with the real popes, the film conveys a sense of authenticity, helped along by the skills of the two actors and their genuine pleasure in one another’s company.  The story begins with the election of Joseph Aloisius Ratzinger, who took the name of Pope Benedict upon his ascension.  The name of one of the other candidates was the always-reluctant Jorge Mario Bergoglio.  Ratzinger did not care much for Bergoglio, who was fairly openly critical of him, as was Bergoglio of Ratzinger.  And indeed, the two held starkly contrasting views about the Catholic Church.  In general terms, the earlier pope was much more conservative than the progressive latter one, who became the present Pope Francis.
The two could not have been more different, one coming from Germanic beliefs about society and conventional order, and the other from a passion about the sacredness of the priesthood in following the teachings of Jesus in terms of humility and equality.  Ironically, what brought them together were their Christian beliefs and their devotion to the Catholic Church.
The conversations and flashbacks remind or inform about the sex and financial scandals that surfaced in the Catholic Church during Benedict’s term and the political history of Bergoglio when he was a Jesuit priest first, then bishop, in Argentina.  In trying to help during the junta and subsequent “Dirty War”, he made some political mistakes, for which he paid dearly, but subsequently believed that the experience was helpful to him morally.  Benedict came to realize that he had not acted judiciously and promptly to address scandals.
In this somewhat haunting—but always interesting—tale, all of the components of filmmaking are top-notch.  Writing, direction, and editing move the story along at a good pace, maintaining the viewer’s keen interest, and flashbacks and changes of location are smooth and logical.  Cinematography is stunning at times and simply gorgeous at others, and the music is in turns wondrously sacred, dancing, or playful.  (References to ABBA and the Beatles are sure to bring chuckles).
One of the most impressive scenes I’ve seen in a film occurs in The Two Popes during an especially sensitive event, when there is an ethereal ray of sunlight, soft religious music, the speaker’s voice seeming to go into a tunnel, then everything abruptly stopped, and what we see is the stark midsection of a closed wooden door.
One of the most touching sequences in the film is the progression of the two characters’ frank distaste toward and disagreement with one another to a place of intimacy, acceptance, and above all understanding.  It is clear that in the end, each learned from the other. Each acknowledged a change of heart and belief in a way that should inspire us today in our time of extreme antagonism and suspicion among groups.

This is a film for everyone in its inspiration for overcoming discordance in a fractious time and its artful, even humorous, portrayal of a beloved, sacred system.