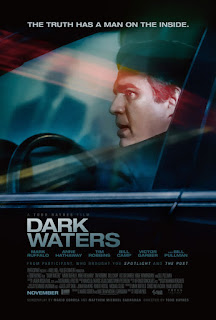 Robert Bilott (Ruffalo) is a promising young attorney who has just made partner in a respected corporate law firm.  He has a number of key supporters as a result of his work defending chemical companies, who believe he will distinguish himself (and them) because of his deliberateness and passion for the law.  He will indeed live up to this faith, although not in the way his supporters think.
Soon after starting this phase of his career, Rob is personally visited in his office by a West Virginia farmer, Wilbur Tennant (Camp), wanting representation. He has been referred by his neighbor, Rob’s beloved grandmother.  Rob patiently explains that he is a civil lawyer and not likely to serve the client well.  Tennant leaves in a huff, feeling that all his antagonism toward authorities is justified.
But Rob is conscientious, and visits his grandmother for more information. She reminds him that as a boy he used to go to the Tennants’ farm every summer (to swim and learn to milk cows!) and thoroughly enjoyed it.  Rob does a bit more investigation, looking at a landfill near the farm, and being shown by Tennant some of the devastation, which he thinks is perpetrated by the DuPont company (DuPont de Nemours, as they prefer to be called).
After doing more research into the company and getting the EPA reports, it begins to dawn on Rob that there is something to investigate (like water and air contamination, as well as animal/human organ damage.  The Tennants do not have the money to hire him, so he discusses with his boss Tom Terp (Robbins) the possibility of taking on pro bono what they foresee as a short-term project.  Terp reluctantly agrees on the basis that it will promote the Taft Law Firm’s good name.
What is in store for them is (literally!) mountains of data for Rob to go through, unsatisfying responses from the DuPont company to his inquiries, and later on, major resistance and obstruction as a defense by DuPont, despite ever-mounting evidence against them.
I wish I could describe to you a heroic story in which legal and political action made a decisive difference.  Although I cannot, I nevertheless urge the public to see this film (updated/extended from the Erin Brockovich) for its application to contemporary environmental and political concerns.  It’s a bit like a detective story that must accumulate data over a long period of time, and becomes a drama that is all too familiar today.
Mark Ruffalo does an exemplary job portraying a man trying to overcome a compromised history by committing himself to helping the disadvantaged.  This comes at a cost, and we see his, his wife’s (Hathaway) and their family’s sacrifices.  Noteworthy (and perhaps award-worthy) is Bill Camp’s performance in playing a West Virginia farmer who is astute but not given credit for it by virtue of his accent, his class, and where he is from geographically (West Virginia). He successively endears others, and distances them because of his extreme (but well justified) anger. He is a significant supporting actor.
Todd Haynes continues to surprise with his explorations into varying subjects and he and cinematographer Edward Lachman’s foray into innovative techniques in Wonderstruck, Far from Heaven, Carol, and this film, show their abilities to portray the poetic as well as the meaningful in their joint works.  I want to give a shout-out to composer Marcelo Zarvos, whose music has a paradoxical effect of being soft and lyrical, but with ominous overtones, even from the beginning.  Those tones let you know this will not be a romp through the park.
The movie gets into substantive issues relevant today about environmental concerns, corporate power, and the costs of social advocacy, while engaging you emotionally into the drama.

Dark Waters turn out to be toxic.