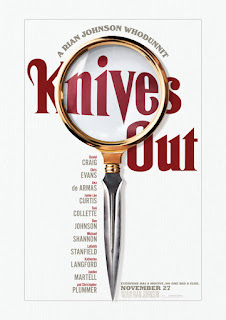 This elegant pastiche fulfills its intention of laying out an ingenious plot with all the usual motifs of detective stories, tossing in blocks of humor and human foibles to keep you thoroughly entertained.  Writer/director/producer Rion Johnson (known for awarded works like Star Wars VIII:  the Last Jedi, Looper, and Brick) outdoes himself here, not only in his own efforts, but in assembling a formidable cast as well, most notable being Daniel Craig as private detective Benoit Blanc with a Texas twang.
The set-up is Marta Cabrera (Armas) working as a nurse for aging Harlan Thrombey (Plummer) a wealthy book publisher.  Thrombey has numerous family members he is supporting, some of whom live in his mansion.  Tragically, one night after his 80-something birthday celebration, he is dead the next morning, apparently from a suicide.
Enter Lieutenant Ellliott (Stanfield) and his trooper, along with a mysterious figure who sits to the side, Benoit Blanc.  As they question family members (paying homage to all the detective stories you’ve ever seen), we become acquainted with the motley group. Eldest daughter Linda (Curtis) is married to Richard Drysdale (Johnson) and they have a son Jacob (Martell). Son Walt (Shannon) thinks he is next in line to manage his father’s company, and is given something else to manage in the meantime.  Then there is the youngest son Ransom (Evans) who has a reputation for not working and hasn’t even appeared for the funeral.  Finally, there is daughter-in-law Joni (Collette), who is still part of the family in widowhood, and her daughter Meg (Langford), who is attending college, paid for by Harlan.  All of these actors shine in portraying their eccentric characters.
Marta, the nurse who will be at the center of the drama, has a mother and sister from another country (humorously, family members always forget exactly which country), and much is made of their origins, and these facts are even used in threatening ways at times.         The crux of the story involves medications Marta administers to Harlan, his penchant for developing published fictions, and a major investigation, with everyone suspect.  Armas is a delight in her wide-eyed innocence and showing in her face her struggles to be a good person in a context of potential exploitation.
Knives Out is likely to appeal to everyone who likes a good detective story.  This one delivers while still spoofing all those that have come before.

Knives Out is a smart, entertaining look at deviousness, innocence, and human nature that can go either way.