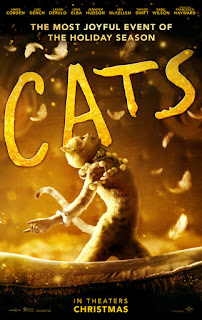 Cats the movie is based on Andrew Lloyd Webber’s play, which, in turn, was based on a set of poems by T. S. Eliot, Old Possum’s Book of Practical Cats, which he wrote for his godchildren.  The play turned out to be the fourth longest running Broadway show in history (18 years), and was just as popular in London, where it opened.  Lee Hall wrote the screenplay, and Tom Hooper directed.
The cats in the film have wonderfully sketched out personalities, and the story has anticipation in everyone waiting for the Jellicle Ball, in which the contestant who has sung the best song about who they are and what they do will be awarded a prize.  This judgment will be made by Old Deuteronomy (Dench), a beloved, highly respected figure for all the cats.
Visually, the movie is lush and beautiful, with the cats in intriguing costumes slithering around—always in artful feline poses and contortions—and the dancers making up most of the troop are in finest form.  As a modern dance, I found it extremely enjoyable.  As a musical, it was rather less so, with two characteristics detracting from the overall presentation.
One is the seemingly interminable opening number, “Jellicle Songs for Jellicle Cats” repeating the same phrases over and over again.  “Jellicle Cats can and do” is the phrase for almost its entirety.  The other is related to the sequence with Grizabella (movingly sung by Jennifer Hudson of Dreamgirls fame).  She is presented as a sad, lonely figure who was once happy long ago, but has fallen on hard times—apparently as the result of losses.  The scenes of her heartache are so poignant, it becomes a picture of clinical depression, which can bring down a whole room of people, and here it brings the story to a place that is so heavy the viewer may have the urge to escape.
The screenplay also suffers from being scattered.  There’s the Grizabella story; there is the slapstick comedy provided by Jennyanydots (Wilson) and Bustopher Jones (Corden); the nostalgic reminiscences of Gus (Aspara-gus, shortened to Gus) (McKellen); the pushy, cheat Macavity (Elba); and still more antics with a magician, Mr. Mistoffelees. One of the best parts, though, is Old Deuteronomy (masterfully portrayed by Dame Judi Dench, who has a wonderful older voice that is still lyrical) and her singing soliloquy at the end.
Despite Cats’ successes in the Broadway and London shows, the movie may not be as big a hit.  It certainly has talented, successful actors, costumes, production design, and music (Andrew Lloyd Webber); and Tom Hooper is a fine director.  It may not be a hit because of the reasons discussed above, or it might be simply a matter of taste (not everyone is a musicals fan).

Lovers of cats, musicals, and modern dance are likely to be the best audience for the movie Cats.


Posted by donnarcopeland at 9:21 AM