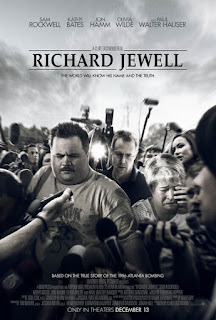 This is a horror story, but it’s actually a dramatized account of what happened to the security guard who recognized the possibility of a bomb being in an abandoned backpack at the 1996 Olympics Games in Atlanta, Georgia.  After being called a hero for three days, the FBI got a tip from a local college president about a security guard he had fired. It’s unbelievable that such an elite group would place so much confidence in it, but they apparently did, and Richard Jewell (Hauser) was relentlessly pursued for almost three months, not only by the FBI, but as well by media outlets competing with one another to get the biggest scoop, and in such a hurry, they did not check their sources as they were supposed to.  The film focuses on one over-ambitious reporter (Wilde) who had unethically obtained a leak from one of the agents and wrote a front-page article identifying Jewell as the prime FBI suspect.
The script by Billy Ray, based on a Vanity Fair article by Marie Brenner, follows the true story closely and is taut and suspense-laden, but also carries with it humorous (not derisive, but sympathetic) portrayals of Jewell and his mother Bobi (Bates).  They are a Southern middle-class mother and son who live together in a neat apartment.  He has aspirations to be a police officer, but has a habit of taking his job too seriously, following the letter of the law (of which he is well informed by his own reading), without an understanding of practical/political considerations. He’s not taken seriously by local enforcement, but to their credit, when he points out a suspicious backpack, they indulge him, only to find that there is indeed a bomb inside.  The area is evacuated as quickly as possible, which does save lives when the bomb explodes.
Along with the fine script, the actors are superb.  Hauser gives such a realistic portrayal of Jewell, the viewer is drawn in immediately with his combination of folksy charm, innocence, and commitment.  Sam Rockwell (Three Billboards Outside Ebbing, Missouri, The Way Way Back, Fosse/Verdon) is one of my favorite actors; he always nails whatever character he is portraying, and here he is a complex Southern lawyer with anti-authoritarian attitudes, just the right person to defend a social outcast with principals.  Kathy Bates plays Jewell’s soulful, devoted mother with just the right touches of dedication and commitment to make it believable that Richard is her progeny.
In his 50-year career, Clint Eastwood is a phenomenon in entertainment spanning television and movies in different roles of actor, director, producer, and even composer.   His films are generally well received, especially Million Dollar Baby, Unforgiven, Bird, and Mystic River.  His most recent films in 2018 (15:17 to Paris and The Mule) were largely panned, but it is likely that Richard Jewell will represent a comeback to his usual solid form.  It may be over the top in some places, but seems to adhere closely to Marie Brenner’s magazine article.

A story about how self-serving machinations of the FBI and media outlets can ruin an innocent man’s reputation and torture him and his family for months.