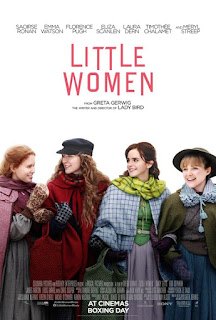 Greta Gerwig updates this traditional story based on Louisa May Alcott’s book for girls by emphasizing the March girls’ ambitions, particularly those that depart from the standard get-married-have children tale.  Most notable are the lines inspired by Gerwig’s conversation with Meryl Streep, who plays Aunt March in the film, during first conceptualizations of the film.  The lines are spoken by Amy March (Pugh), the youngest sister, complaining about women not having rights—they can’t own anything; if they leave a marriage, even property they had before marriage, even their children, would belong to the husband.
Much of the film, however, adheres to Alcott’s novels.  Four sisters are being brought up by their mother while their father is serving as a chaplain during the Civil War.  Marmee (Hurd) is a strong female model for them, managing—with the help of the two older daughters Jo (Ronan) and Meg (Watson)—financially, and beyond that, instilling strong values (helping the sick and the poor, with a strong commitment to forgiveness) in her daughters.
The family reflects the temper of the times, particularly where women are concerned. What makes the story most interesting are the differences in personality and temperament among the four sisters, and how these play out with family and friends.  Jo departs most from the norm by pursuing independence at almost any cost, Meg by marrying for love over “prospects”, Beth (Scanlon) by her musical ability, and artistic Amy at first by her self-entitlement and later by her practicality.
A bonus in this rendition of Little Women comes at the end when Jo is clearly taking charge of her career by cannily negotiating with the editor Mr. Dashwood (Letts) on a cash advancement, copyright, and share of the profits.  (Although she does have to make one major compromise so that the story ending will sell.)
Yorick Le Saux’s cinematography with its warm, bright palette and vividness of interior and outside scenes contributes majorly to the production, helping to give it soul, along with the pleasant, era-capturing score of Alexandre Desplat. Saoirse Ronan’s performance is exemplary, attaining the promise of her work in Hanna, Brooklyn, and Atonement, and being a major force in capturing our attention.  She is well supported by Emma Watson, Florence Pugh, Eliza Scanlen, and Laura Dern as sisters and mother.  As love interest to more than one sister, Timothee Chalamet glitters as an honorable heartthrob not just for the sisters, but for some audience members as well.  It is a treat to see Tracy Letts playing the discerning publisher with a soft heart, following on his bombastic performance as Ford in Ford v Ferrari. Likewise, seeing Chris Cooper as a benevolent, wealthy Mr. Laurence after the revolting father he played in A Beautiful Day in the Neighborhood is refreshing.  Finally, Meryl Streep proves her value once again in playing a rich dowager who is bound to the past.
Perhaps because I personally was never an impassioned devotee of Little Women, I’m not enthralled with Greta Gerwig’s remake of the classical tale.  Interesting and entertaining as it is, it makes me question remakes in general. That is, this tale has been told on stage, on television, and in film almost continuously since 1933.  This version, although set in the 19thcentury, is meant to capture the sentiments of today.  And it does, with flair to a great extent.  I just have a problem with telling a story already well told.