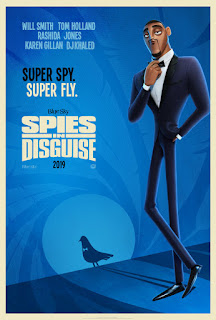 This is a high-tech animation that the kids in the audience found at the screening I attended to be great fun.  There are the obligatory scenes of puke, poop, and pee; but the story has substance in pitting a nerdy little peace-loving scientist against a macho master spy who always insists on doing his jobs alone and “fighting fire with fire.”  The scientist Walter’s (Holland) response to that is, “Then we all get burned.” Writers Brad Copeland and Lloyd Taylor have inserted segments that make you chuckle and sometimes laugh out loud when the character Walter uses scientific lingo that few would understand—least of all, Lance Sterling (Smith)—like “spectral analysis” and “thermography”, and “exothermic reaction.”  Walter always explains what he is doing, and he comes up with ingenious inventions to get Lance out of trouble:  a robotic hand (which has gone missing!), glitter that obscures the visual field, and then produces serotonin when the field clears and kittens appear, making the gnarliest of bad guys go, “Aw…” There’s even something that produces a giant hug that envelops the bad guy and traps him in its bubble.
The gist of the plot is that the young budding scientist is encouraged by his mother to be himself, and reassures him that they are a team and she will always have his back.  He takes these lessons to heart, and is more than puzzled when his path crosses that of ace spy Lance Sterling, who has a habit of dismissing everyone as beneath him. Because he doesn’t really see anyone besides himself, he misses young Walter’s gifted talents and actively tries to swat him away like a fly.
But there is something that will haunt Lance when he discovers someone has stolen an asset from him, and is even passing himself off as Lance, damaging his reputation.
The film has a number of good points, especially the one in which children will see Walter’s persistence in the face of dismissal and discouragement, his maintaining his integrity throughout, and ultimately becomes a hero for his intelligence and creativity.  Also helpful for children is for them to witness Lance’s transformation from an over-confident narcissist to someone who is reduced to a pigeon (a pigeon?? Yes!!) and learning that other beings have phenomenal skills too, and that they know how to function in a team.
Voices of actors like Tom Holland, Will Smith, and Ben Mendelsohn (playing the bad guy) bring excitement and verisimilitude to the story, backed up by the talents of Brosnahan, Jones, McEntire, Khaled, and Oka.  Music by Theodore Shapiro adds much to the drama and humor of Spies in Disguise.

Spies in Disguise is entertaining, and a great film for kids to see.

Posted by donnarcopeland at 10:02 PM