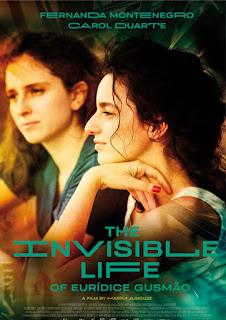 To be a woman in the 1950’s in Brazil would be unbelievably dreadful for a woman of today.  It’s taking what seems like eons for our situation to change, but at least women in western countries have it much better than those we see in this fine movie. Director and co-writer (with Murilo Hauser and Ines Bortagaray) Karim Ainouz appears to be especially sensitive to women’s issues, and this film is primarily from the point of view of women.
Here, we see two sisters turning into young women who have been extremely close all their lives.  Guida (Stockler) is the one more grounded in what her culture sees as woman’s role, so aspires only to marry well and have a family.  She is very pretty, adventurous, and impulsive, and so is easily swayed by a Greek sailor who woos her and whisks her off to his country. Her life reminds us of life-long tragedies that can result from decisions made on a whim in the teenage years.
We expect Guida’s older sister Euridice (Duarte) to fare better, and in a sense she does—but at great cost.  Or maybe she doesn’t, actually.  She aspires to be a concert pianist and has the talent for it, but somehow gets married before achieving that dream.  She has married responsible Antenor (Duvivier), who provides a good living and is kind and helpful to her aging parents.  Euridice is smart and clearly wants to postpone having children until she is accepted into a music conservatory in Vienna, a dream downplayed by her husband, and previously forbidden (as much as he had the power to) by her father.  As she gets closer to her dream, the anxiety and fear of her husband increases.  What a letdown; he sees it as a threat rather than cause for celebration.
Yes, the script is predictable to some extent, but there is value in accompanying these two women on their journeys and experience with them the challenges they face, whether or not they adhere to social dictums.  It’s satisfying to see that there is a way out discovered by one of them who finds a different kind of family than the one of her origin, one which treats her so much more lovingly.
I felt there was too long a gap between Euridice’s accomplishment of her dream and her later years.  The film sped by significant events too quickly, and suddenly, we’re sorting out grandchildren.
Invisible Life is Brazil’s entry into the Academy Awards’ International Feature Film category, after winning the Un Certain Regard prize at Cannes earlier this year.  Although not a frontrunner, it is one of the contenders.

I applaud the filmmakers of Invisible Life in their elucidation of the challenges and heartbreaks of women in predominantly patriarchic societies.

Posted by donnarcopeland at 7:41 PM