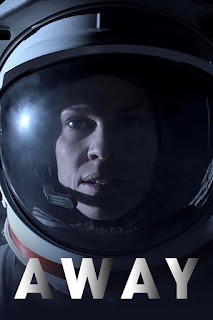 Creators of this remarkable dramatic series on Netflix, Jessica Goldberg and Andrew Hinderaker, deliver such a vivid rendition of a space journey it is hard to believe it’s not real.  But what really elevates it are the just-as-realistic characters and interpersonal relationships and conflicts, both on the ship and at home on the ground, and even back in time.  It makes for high drama in space travel while anchoring the film in plausible, nuanced complexities in human relationships.
A diverse group of five astronauts are setting out on a mission to Mars; before them, there have been numerous attempts, but no ship has landed and allowed the crew to walk on the planet.  The Atlas’ commander is the first woman in the role, Emma Green (Swank), who will have to prove her worthiness to be in that position many times during the three years of the mission.  She leaves at home her devoted husband Matt (Charles) and daughter Alexis (Bateman).  It’s noteworthy that Matt was an astronaut in training with Emma, but got disqualified for medical reasons.  He continues to work at NASA headquarters, and will be significant in problem solving and direction of the project.  His support of his wife all during the flight is exemplary, and serves as a model for husbands/fathers who are married to wives in the limelight.
In addition to Emma, other astronauts include: Russian Misha (Ivanir) who feels he’s better qualified to be Commander by virtue of his experience; Chinese Yu (Wu), a chemist who initially sides with Misha and is regarded as cold; Indian Ram (Panthaki), second in command and an early supporter of Emma; and Kwesi (Essandoh), the least experienced and most religious, having lost his parents in Ghana and then adopted by a Jewish family.
The number of themes in Away speak to the quality of the writing; they are all substantive and add to the excitement of the drama. Tensions are highlighted between the pulls of family and adventure/career; parenting issues that arise constantly between the parent onboard and the child at home, between the spouse at home and the child; and in the childhood backgrounds of all the astronauts.  Physical illness and disability crop up among those on the ship and those at home; emergencies in health and on ship are ongoing; and foolish decisions—even those made out of altruism—are called into question.  Death is focused on in a number of settings/circumstances in a way that is encouraging.  To the film’s credit, all of these result in insights that are inspiring and move the story along.
Hilary Swank as the star comes into her own in continuing a long career in playing strong, inspiring women who can be respected and admired.  In this, she is head of a proven elite team who meets her mark, but is still shown to be compassionate, empathic, and a nurturing parent with a close bond to her daughter.  Josh Charles has an array of good roles and good acting to his credit, and perhaps this film will serve as one that plays to all his strengths in depicting a male character showing three-dimensionality in being an aggressive leader, a protector, and a nurturing father.  All the other main actors—Ivanir, Essandoh, Panthaki, and Wu—are perfect in fulfilling their roles.  Talitha Eliana Bateman as Matt’s and Emma’s daughter should be given a shout-out, along with her boyfriend played by Adam Irigoyen, and her caretaker during her parents’ absence, Melissa, played by Monique Gabriela Curnen.
This Netflix series has much more to do with human beings and their relationships than it does with space exploration, although that aspect is certainly in the forefront and just as exciting as those that have gone before.

Take this journey into space and experience the thrills, chills, and utterly human conditions that move us all forward in life.