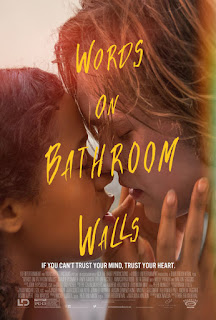 This is an unusual treatment of a story about a teenager with schizophrenia.  Based on a novel by Julia Walton, Nick Naveda adapted it to a screenplay that focuses on the inner experience of someone with a major disorder.  It has many strong points, and a few aspects that I have questions about.
Adam (Plummer) and his mother (Parker) are grieving the absence of his father, but are adjusting reasonably well.  He shows his interest in and a flair for cooking, which compensates well for the emotional upset troubling both of them.  The immediate challenge, though, is in trying to find a way to treat his illness—an old story for those seeking an effective medicine for severe psychological problems.  His behavior has necessitated a change in schools, and this is about the same time a new drug has appeared on the market.
His new school is Catholic, which shakes Adam up a bit (his family is not particularly religious), but his mother brushes that fact away; so, after making a mess and being bullied at his previous school, Adam is willing to give it a go. At the new school, a coincidental meeting in the boys room introduces Adam to Maya (Russell).  (I won’t go into it; this is one of the really fine scenes in the movie.)
Maya is the smartest girl in school and has supreme confidence to go with it. How does she have anything in common with Adam, and how could they possibly form a friendship?  That’s an underlying theme of the drama. Beyond Maya’s intelligence, she has a heart, and agrees to take on Adam at a reduced rate for tutorial lessons.
What follows is a commentary about the illness, its effects on other people close to the patient, and in turn the reverberating effect back on him.
Charlie Plummer’s performance as a troubled youth is entirely convincing, and his relationship with Molly Parker as his mother is likewise realistic.  Their interactions—as well as those with the rest of the cast, namely Taylor Russell as the tutor, Walter Goggins as the stepfather, Andy Garcia as Father Patrick, and the three hallucinated figures (Anna Sophia Robb, Devon Bastick, Lobo Sebastian) reflect the quality of Thor Freudenthal’s talent and work as the director.  Background music by Andrew Hollander is consistently entertaining and in sync with the plot.
One of the film’s biggest strengths is in its central theme of addressing important life issues that people generally feel like they have to hide.  Another is the way special effects are used to project Adam’s hallucinations.  They give the viewer a good sense of why they’re so frightening and disruptive to him.
My criticisms of the film stem from my background as a psychologist, and are related to treatment of schizophrenia.  Perhaps intentionally, screenwriter Nick Naveda de-emphasizes psychotherapy, which I believe is essential to successful treatment of major disorders.  What happens in the film may be a reflection of Julia Walton’s descriptions in her novel on which the script was based.  Curiously, Adam’s psychiatrist is never shown; instead, the story seems to imply that Adam’s few sessions with the priest were actually more influential in his adjustment than anything else.  Because of results from research studies, it is now generally accepted within the mental health field that a combination of psychotherapy and medicine is the most effective approach in helping those with severe illness.
This point is related to my general contention that filmmakers should be sensitive to the ways in which they are portraying life situations and the need to consult with experts in the field so as not to misinform the audience.
I can recommend Words on Bathroom Walls as a fine work that would be helpful in demonstrating to the public challenges faced by those families in which severe mental problems are an issue.

Words on Bathroom Walls has an intriguing mix of seriousness and humor to get across its message about the importance of facing mental illness head-on.