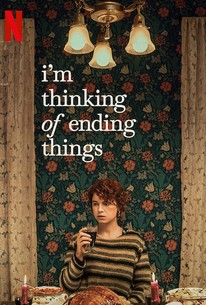 Few could imagine this film; only someone like Charlie Kaufman, who is able to dream in the surreal and then apply it to real life.  The film starts out with an unnamed young woman who is wondering about her boyfriend while considering suicide at the same time, i.e., I’m thinking of ending things.  “I’m thinking of ending things” is ambiguous; is it about life, or simply the relationship?
Traveling in a snowstorm to meet the parents of her boyfriend, “the young woman” is reflecting on her relationship with him and musings about life itself.  She ponders his assets—being understanding of her and her career and knowledgeable about scientific facts in general.  She is clearly weighing in on the relationship and whether it is worthwhile.  And they have good discussions about various topics on their way to visit his parents, whom she has never met.  But there are morbid times, such as her poem, and you begin to realize that this is not to be an upbeat story.
They arrive at Jake’s parents’ home, and sure enough, his mother is waving from an upstairs window.  But despite the welcome, it will be some time before they enter the house.  Jake (Plemons) wants to show her around the farm first, pointing out the dead lambs and pigs in the barn.    Did you think this would be normal?  Think again.
They enter the house, and despite the welcoming wave, it will be some time before the parents finally appear.  A bountiful feast is set before them—even though Jake has been careful to point out that his mother had been ill, so not to expect too much—and then proceeds some crazy sequences that show not only the pathology of the family, but how Jake and even the woman herself begin to sound deranged.
Layer upon layer, the film delves into the psyches of the players.  Identities shift around, with the oft-repeated theme of the woman needing to get back home “by tonight.”  But Jake detours, even to a visit at his old high school, where a janitor is patiently mopping the hall floors.  (We have seen him before in scenes unexplained.)  The film continues in a surreal vein, requiring a metaphorical interpretation of everything that has gone before.
The actress Jessie Buckley who plays the part of the young woman brings charisma to a story in which it is not always clear what is going on.  We’re in her mind the whole time, trying to figure out what is transpiring before our eyes.  She has the ability to convey so much in her facial expressions and verbal outpourings it’s easy for the viewer to identify with her and fully comprehend what she is going through.  Jesse Plemons is a good counterpart, but his character is not as appealing or sympathetic, and there are major shifts in his personality, especially toward the end of the story.  At first, he appears to be empathic, accommodating and agreeable, but in the end he is passive-aggressive and ineffectual.  Unfortunately, that works against an actor.
This is another one of Toni Collette’s (long overdue for an Oscar) superb acting feats (Muriel’s Wedding, Hereditary, Little Miss Sunshine and a host of others), in which she is able to look charming one minute and seriously deranged the next.  In this feature, as an older mother who is struggling with various ailments, her peals of laughter at unexpected times demonstrates her perfect sense of timing and effect.
If you like metaphorical puzzles that delve into the human psyche, this is a film for you.  It deals with the meaning of life, the vagaries of relationships, and the psychosocial phenomenon of aging.  If not, you may want to skip it and find something less disturbing to watch.