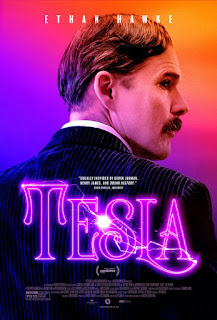 Tesla is remarkable, not only the man himself; but Michael Almereyda and his crew have created an innovative way to present a docudrama.  To wit:  The narration is provided by an important figure in Tesla’s life; scenes that seem not to have anything to do with one another are juxtaposed by switching back and forth between them; scenes are presented, and immediately after, the narrator says, “That didn’t actually happen”; figures suddenly appear in a scene with no introduction as to who they are; the dialog is spiked with profound conversation such as weighing the relative benefits of vindication versus love, capitalism versus idealism, and poetic statements like some of [Tesla’s] experiments were “like someone getting the ocean to sit for a portrait”; “Energy creates energy; it is by spending myself I become rich” [Sarah Bernhardt character]; and one of the last lines in the film spoken by the narrator referring to Tesla’s enigmatic personality and beliefs—“Maybe the world we live in is a dream that Tesla dreamed first.”
Almereyda wrote the script as well as directed the film, and was one of the producers.  I don’t know how much of a hand he had in editing the work (talented Kathryn Shubert is the named editor), but it was so creative/jumbled, that at times it was distracting. Cinematography (Sean Prince Williams), special effects (Drew Jiritano), and music (John Paesano) are all used well in the service of creating a beautiful, artful film, along with presenting a wealth of historical data.
A highlight of the film is Ethan Hawke’s portrayal of the man Nikola Tesla. He is known for capturing the essence of eccentric characters (e.g., First Reformed), and here he presents the enigmatic, complex personality of a genius who clearly lived in his head and had little sense of the real, practical aspects of life (which is probably why he knew little about economics/money management, and was often cheated in his business).  A perfect contrast is made between him and Thomas Edison (MacLachlan), who was a master at getting people to do his bidding.
Edison is played by Kyle MacLachlan in a performance that is probably one of his best to date.  Eve Hewson is the narrator who is portrayed as a woman clearly interested in Tesla, but who gave up on him when it became clear that he was not the “marrying type.” She is the daughter of J. P. Morgan, who financed some of Tesla’s experiments, but turned away when Tesla took too much time in realizing some of his dreams.  Hewson’s role (which she performs admirably) is influential in the story, partly because the actress is so attractive, but also because she makes astute observations about Tesla and relates some of the experiences in his early childhood that determined the man he would become.
Tesla will appeal to those interested in scientific advances and to lovers of art films that venture into new modes of presentation.  This film frustrated me at times, but I ended up with admiration for its artistic value, along with being sympathetic with the Teslas of the world.

An innovative presentation of a combination of art and science in understanding a historical figure.