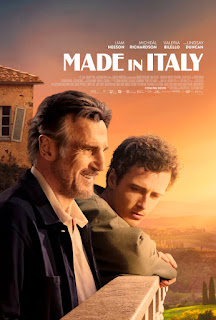 Any movie with Italy in the title attracts me instantly because of the wonderful trips I’ve had there with incredulous landscapes, welcoming natives, and cultural milieu.  And this film does not disappoint in that sense.  The setting is mostly in Tuscany, among the rolling hills, luscious vegetation, and camaraderie of the Italians.   Provocatively, the story begins in a British art gallery where the owners are splitting up.  (Actually, the husband is being dumped by the wife whose family owns the gallery.)
That is the underlying theme to begin with, but the crux of the story is about the young man—the husband above—who in desperation looks up his estranged father with the hope of selling a seldom-used property in Italy so he can buy the gallery in New York.
Robert (Neeson) is surprised to hear from his son Jack (Richardson), but gamely travels to the property in Italy—actually a small estate—with the plan to sell it. As is often the case in old houses, memories abound, and it is there we get the back-stories of Jack and Robert. (Note that these are two men who are typically reticent, and their accounts are slow in coming.)  But in the meantime, the viewer can experience the richness of the Italian landscape and people.
The story of the two men includes the sudden death of the older man’s wife and the younger man’s mother.  After that, the father tries to protect his son from painful memories and in so doing unwittingly closes off not only his relationship with his son, but also the child with his mother.  The beauty of the plot (although rather expected) is that in renovating the house, the two men restore their connection.
Liam Neeson as the father is exemplary as always, and Michael Richardson fits the role as son extremely well.  Lindsay Duncan as the real estate agent brings genuine comic relief, and Valeria Bilello as the young restaurateur add color and interest to the plot.
Made in Italy is a pleasure to watch, certainly for those who have been to Italy, but likely also for those with aspirations to visit.  I would recommend it as a pleasant evening entertainment.

Made in Italy will take you there for a pleasant visit.