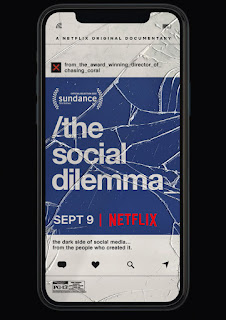 This is a documentary about social media that is more interesting than scary—most of the time.  It has something like 20 people with former executive positions on social media sites discussing what is at stake for all of us.  I certainly didn’t have any idea how intrusive Facebook, for instance, is, how much they can track us, nor especially how much they can modify behavior and influence perception, without our even being aware of it.

The documentary doesn’t blame any one person or site and is clear that the person creating the site had no idea how it could/would eventually be used.  Initially, these sites were gratifying in getting information to people and connecting everyone in such an efficient way; it’s just that eventually the business model used had another component:  a money machine.  This has resulted in tech companies putting their profit-making goals ahead of user interests.  (“If you aren’t paying for the product, you ARE the product.”)

Because of the way social media has been constructed (using intermittent reinforcement and the profit motive), it intentionally produces addictive behavior (we leap to our phones when we hear a tone and respond to its message), keeping us involved in the site.  That’s why so many of us are hooked on our phones.  They give a good example of a teenager who vowed to stay away from his phone for a week and what happened during that time.  Little did he know that there were tech people behind the scenes manipulating his behavior when the site realized he wasn’t engaged.  The documentary cites figures about how anxiety, depression, and suicide among young people have increased, while getting a driver’s license and dating are rapidly waning since the advent of social media in 2010 to now.

The documentary provides explanations about some of the things I have been questioning.  It points out that political polarization is at a 20-year high, and suggests why that is.  It offers an explanation as to why democracies around the world are failing, such as the use of misinformation tactics to sow chaos and division.  That’s what Russia apparently did in 2016 during the American Presidential election; it didn’t hack Facebook, it simply used its existing format to plant seeds.
Finally, it points out the existential dilemma we’re in now.  Technology has the potential to bring out the worst in society—or the best.  It is up to us—humans—to use our heads.

An important film for all to see in contemporary times.