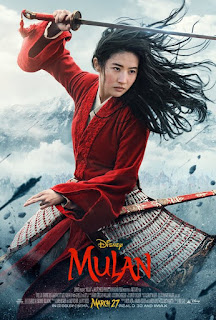 What a thrilling movie for girls!  Mulan (Liu) is growing up in a small village in China, where she is showing great skill in martial arts.  This goes against tradition, however, and she is instructed to hide her talents and become more traditionally submissive.  She tries it, but when her aged father volunteers to go to war to save the kingdom, it’s too much for her.  Taking her father’s sword, armor, and conscription document, she disguises herself as a young man and joins the army.
The story is very fanciful, both in terms of her being able to pull off the disguise and in the supernatural feats Mulan accomplishes (not unlike all action movies nowadays), along with another female character.  But this movie is primarily for children, so it fits right in with most of the literature for that group, and I got completely immersed in it as an adult.
We enjoy the challenges Mulan faces and watching her get out of predicaments while staying fiercely loyal to her family, the kingdom, and their traditions.  She is often heroic, but with the feminine influences of the writers (three women and a man) and director (Niki Caro), she occasionally shows feminine touches, such as the time she is going to battle with fellow soldiers and they are denying their fear and quarrelling a bit, she makes a unifying pronouncement and pledges her vow to protect all of them.  Since she has just proven her fighting skills to them, they calm down and prepare for battle.
The story has a number of elements that are good models for children, such as the bravery and competence of females, the honor in being loyal and true, wise leaders taking advice from their subordinates, and simple kindness toward others.  Besides those aspects, the cinematography (filmed in New Zealand and China), music, and costumes are gloriously beautiful.
As Mulan, Yifei Liu’s athletic skills show her talent and training, and her acting ability is just as impressive, whether she is in the throes of battle or quietly dealing with her family, the matchmaker, and a fellow soldier.  The baddie in all this, Bori Kahn played by Jason Scott Lee, is just as awful and fearsome as he is supposed to be.  A surprise is another female super-hero (well played by Li Gong) who is assisting Bori Kahn and can change into a falcon or a whole flock of warrior birds to fight for their cause, the overthrow of the kingdom.  Like Mulan, she was supposed to have assumed the traditional female role, and because she did not, she was ostracized and called a witch.  But because of her character and her history, she attempts to be a mentor to Mulan.
Mulan should be a hit when it opens, appealing to children around the world and satisfying their need for exciting fantasies.  Disney+ and the filmmakers should be congratulated on their accomplishment.

Mulan is an exciting adventure that will certainly appeal to children, as well as many adults.

Posted by donnarcopeland at 10:11 AM