THE SECRETS WE KEEP 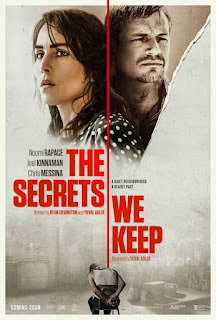 The filmmakers really double down on “secrets”, the word in the title.  In the story, secrets are nested in layers, and although I think it’s intended to increase the mystery, it simply became off-putting to me in the end.  Noomi Rapace as Maja brings her ability to exploit a sense of intrigue as she has done so well before (The Girl with the Dragon Tattoo, The Girl Who Played with Fire, Prometheus, and Sherlock Holmes:  A Game of Shadows).  Here, as Maja, she’s apparently happily married to a doctor (Chris Messina), but her eyes are always alert on those around her.  One day in the park with her young son, she thinks she sees someone she recognizes—someone from her hidden past.

When they met in a hospital, Maja told her husband she was Romanian and after falling in love they ended up married and living in a small town, USA.  She has given him no details of her early life, and even when she thinks she recognizes the man she saw in the park, she says nothing to Lewis (Messina), although she keeps tailing the man.

Once, when in a glimpse she sees his face clearly, she is convinced he is a part of her past.  She pursues him relentlessly, and manages to kidnap him, whereupon she must tell Lewis more about her past.  The movie continues to give him (and us, the audience) bits and pieces, until finally it comes to more than one showdown.

The big question for us to answer for ourselves as we watch The Secrets We Keep is whether Maja’s claim is based on fact, or whether it is a case of mistaken identity.  (Easy to do after 15+ years).  This part of the movie works well, although I still became impatient with characters not using simple logic time and again.

We get torn between fact and coincidence throughout, and the ending is a deus ex machina.  It doesn’t come logically from anything that has gone on before.

Rapace is as brilliant an actress as ever; her ability to persuade others is convincing, and she maintains her mystique, even when she is in everyday types of conversations.  Chris Messina as her husband is less well played, not showing the expected temperament of a physician and with a bewildered expression much of the time.  Joel Kinnaman and Amy Seimetz as the other couple are perfectly cast and lend a nice balance to the production.

Horror arises when the past impinges on the present.

Posted by donnarcopeland at 12:57 PM