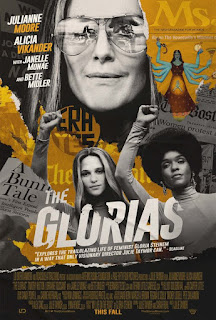 “You will do what you want to do with your life.”  Words so aptly spoken to Gloria Steinem by a wise doctor getting a solemn promise from her.  This film of Gloria Steinem’s life—drawn from her memoir, My Life on the Road--constitutes one of the more artistic renditions of a famous person’s life.  Julie Taymor, writer/director/producer, is as interested in portraying the essence of the woman as she is in presenting factual information.  Toward that end, she flips back and forth in time, showing Gloria as a younger child, an older child, a young woman, and a fully developed activist for human rights.  During the film, these different “Glorias” talk to one another, illustrating how we carry our different ages and memories along with us throughout our life span.  So the film moves back and forth in time—which usually annoys me—but the way it is shown here makes sense.

Taymor shows Gloria growing up in a family of modest means, the child adoring her fantasy-loving father (Timothy Hutton), who follows his own dreams, leaving her and her older sister—but primarily Gloria—to assume responsibility for a mentally disturbed mother.  This woman, despite her weaknesses, saw to it that her daughter was able to attend the renowned Smith College from where she graduated with honors.

The film shows the young woman’s encounters as she makes her way in journalism—sometimes having to take time out for supporting herself by dancing—but showing her ability to withstand easy, compromising paths while being attuned to the important issues of the day (e.g., racism, labor unions, reproductive rights), and demonstrating her capacity for empathy and nurturance.

At a time when women were discouraged from speaking their minds, Gloria asserted herself, and despite an almost debilitating fear of speaking in public, managed to overcome it to advocate for principles she felt strongly about. Although she is known primarily for her work in women’s interests, she also championed causes for blacks, farm workers, and Native Americans.

Taymor has fun with filmmaking when about half-way through the story, she inserts a sequence of pure fantasy, visualizing what she would like to see happen to a chauvinist interviewer who asks Gloria inappropriate questions.  (We see him spun out into space in a red cloudburst.)

But on a more serious note, the film is timely in its release just after the death of Supreme Court Judge Ruth Bader Ginsburg, who had to endure discrimination at Harvard University when she was attending as a woman.  When Harvard invited Gloria to speak there years later, she was able to scold them in a way that actually won points for her, despite her chiding the professors for claiming that rape was a very small assault and for their course list omitting any reference to women.

I found The Glorias to be maximally entertaining as well as informative and inspiring in its depiction of the “notorious” Gloria Steinem. THE GLORIAS is available for purchase on Digital and Streaming exclusively on Prime Video starting September 30th

Walk on the wild side with an endearing “rabble rouser” as you see her fight for human rights.

Posted by donnarcopeland at 8:30 PM