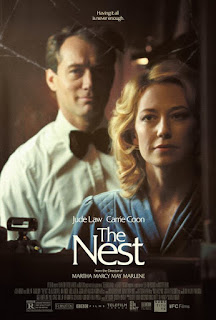 This movie is odd, with the title being the strangest part.  Associations to a nest are normally that of a stable, comfy, nurturing place with a family altogether.  The story starts out like this, although with a few signs that there might be fundamental problems—a mother consistently late in getting the kids to school, a father needing to defend yet another major move in a short amount of time.  But the parents are basically there for the children; the father is earning enough for a very comfortable living, and the mother trains horses and teaches riding.  What could go wrong?

Rory (Law) is excited about a new job prospect, which would mean moving the family from New York to London.  His wife Allison (Coon) is not enthusiastic, and tries to talk him out of it.  But he’s a salesman by nature, and off they go.  He secures property with a huge old mansion and enough space to build stables so that Allison can have a business of her own and not work for someone else. He has joined a firm in which he also has his own business.  He’s pumped up with investment ideas and seems on top of the world.  The rest of the family is a bit more skeptical, but adjusting.  The story is about what happens next.

Sean Durkin, writer/director (as well as Martha, Marcy, May, Marlene), has created a moral of a story that dissects a family with underlying flaws to show ways of coping and probable outcomes when the father is a dreamer, the mother is practical-minded, and the kids desperately try to cope with their differences.  The actors are all well cast, and have chemistry that conveys a believable family going through life changes, and showing the type of stress associated with transitions, a teenager in the house, and a sensitive younger brother.

Jude Law has been a major talent beginning in the ‘80’s and best known recently for the HBO TV series, “The Young Pope” and “The New Pope.”  He fits hand-in-glove with the Rory character here, showing loads of charm in business and at home and warm relationships with his wife and his children, even his wife’s daughter.  He clearly adores Allison, bringing her coffee or tea and gently waking her up in the mornings.  Carrie Coon is less well known, but carries off the role of the spunky woman who grew up perhaps underprivileged, but has managed to navigate the waters of the wealthy—most of the time.  Under stress, Coon shows how the veneer falls away, and she reverts back to old antics.  Both younger actors—Roche and Shotwell—give highly convincing performances that enhance the movie’s value.

The hardest part of The Nest is watching it when you see family members making mistakes and you can easily visualize the outcome. But I think it’s a good movie for younger audiences who might be able to profit from a story not uncommon among families of today.

Welcome to a “golden” family’s experience when stressed beyond a certain limit.