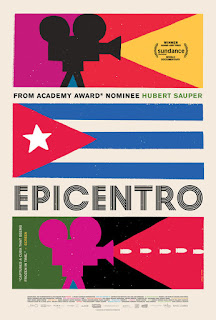 In this documentary, writer/director/cinematographer/narrator Hubert Sauper aims to represent his views about reality as depicted in photography, storytelling in voice and song, cartoons, and the cinema itself, which he calls “the machine of dreams.” He starts out by showing the USS Maine docked in a Havana harbor in 1858 and by various accounts got blown up. History is not clear as to what actually happened, but from Sauer’s point of view, it was an instance of the U.S. posing as liberators of a country in order to occupy and control it. The U.S. claimed that it was exploded by the Spanish—which ignited the Spanish-American War—but subsequent investigations have cast doubt on that explanation.  Nevertheless, Sauer has done additional research and sticks with his view.

Interestingly, in this film, Sauper focuses on Cuban children to tell much of the story of Cuba by their reciting what they’ve learned and singing the Cuban national songs.  As he does this, he follows them with his camera and we get something of a documentary of daily life in Cuba, reasons for their hostility toward the U.S., and a sense of their zest for life and desire to be free.  (Jabs at President Trump’s immigration policies are made several times and in various ways, e.g., referring to the U.S. placement of the flag on the moon and subsequent pictures of its barrenness, there’s a call “to make the moon great again.”)  So humor is inserted now and then.

Many interviews are conducted on the street as Sauer follows the children around, showing Cubans’ ideas about travel, American vs. Cuban culture, and—in my view—conflicted attitudes about the U.S.  They love Disney and the movie stars, but their resentment centers on capitalism and how much uncaring it can produce.  They’re certainly not wrong about that.

Sauper exploits in a good way the participation of Oona Chaplin in the film.  She is the daughter of Geraldine Chaplin, the granddaughter of Charlie Chaplin (whose film clips are shown at the end), and great granddaughter of Eugene O’Neill.  She interacts with the children in the film, even in a skit in which a mother and daughter are literally fighting one another.  This is rewarding partly because the encounter is so realistic and partly because the child is an aspiring actress who gets a window into the fantasy-reality connection.

This is an unusual documentary that depicts an artistic account of the US/Cuba history, with operatic background music, Cuban songs, and what appears to be everyday life in Cuba today.