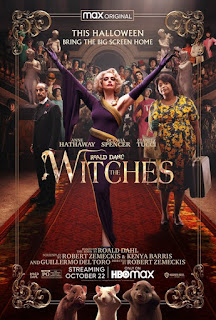 When the witches are away, the mice will play.  This is a fun piece narrated by Chris Rock and starring him and two excellent actors, Octavia Spencer and Anne Hathaway, in a fantasy based on a Roald Dahl novel.  Kid-friendly, of course, but with suspense that is likely to be enjoyed by adults as well as children.

It starts out tragically, but Spencer’s warm presence as a grandma is soothing, and she has her work cut out for her with her grandson’s (Bruno) grief and, later, his dilemma.  To help him with his grief, Grandma (Spencer) brings home a pet mouse for her grandson, which does indeed spur him to move on to the next step.

After the boy encounters a witch in the store, Grandma decides they need to go stay in a fancy hotel where the wealthy white people stay.  (This is on the premise that Witches only seek out minorities—e.g., the blacks—and the disadvantaged.)  Grandma knows this from losing her childhood friend in just such circumstances, and she informs her grandson about witches.  They are demons made to look like humans. They have no toes, no hands, no hair—and must compensate for this with gloves, wigs, high-heeled shoes, etc. When they go out in public, they look like regular society women.

By coincidence, the International Society for the Prevention of Cruelty of Children is having a convention at this very hotel.  Crossing of paths between this group (which is a front for the Grand High Witch played by Hathaway and her coven) and Grandma and her grandson forms most of a plot filled with nail-biting suspense, along with some horror and comedy.  Mice-phobic people might want to stay away—but should see—this escapade.

Special effects (Adrian Bennett, Fernando da Silva et al.) take center stage in showing what happens when magic appears to spice up the action in the story. Here it is used to engage the audience as much as the plot and the actors.  And it is so satisfying!

Co-writer and director Robert Zemeckis, with the help of Alphonso Cuaron and Guillermo del Toro (Mexican filmmakers we all know and love), has assembled a cast and crew that elevate this film from a run-of-the-mill children’s movie to one that is capturing and entertaining, but has important messages related to acceptance of others, regardless of their appearance, the importance of family, and simply enjoying life, whatever happens.

A film for the times in terms of its message and as a vehicle to escape momentarily the concerns of the day.

Posted by donnarcopeland at 11:10 AM