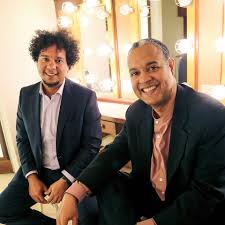 This is a most remarkable, captivating story exemplifying political impact on families when countries enter into fractious relations amounting to a cold war. Ilmar Gavilan and Aldo Lopez Gavilan were born in Cuba six years apart, after the U.S. had already placed an economic embargo on Cuba after the revolution there in 1959.  The boys’ parents were both musicians, and when Ilmar showed his talent on the violin, it was arranged for him to study in Russia.  He and his mother, a concert pianist, were there for a year, after which, Ilmar settled in New York to continue his studies.  Meanwhile, back in Havana, Aldo was following in his parents’ footsteps in becoming a pianist like his mother and a composer like his father, and he was able to study in England, but returned to Cuba to start a family.  Each Gavilan son progressed to international fame separately, almost never being able to play music together, until President Obama began to open doors between the two countries.

The documentary guides us through the brothers’ lives, contrasting the major differences of their experiences as a function of the two nationalities.  Music is the incredible strain that unifies almost every aspect of this story.  Ilmar marries a Korean cellist; Aldo marries a Cuban conductor. Clearly, music—as well as being a tie between them—is the most important value of everyone involved.

For that reason, the reunion of the brothers in Havana when travel between the two countries becomes possible, is thrilling for them—and the same for us vicariously. Throughout the film, viewers get generous helpings of the music performed by the Gavilan brothers and their associates (Ilmar’s Harlem Quartet), family members’ concerts, and others, even with American violinist Joshua Bell.

The directors who put all of this together, Ken Schneider and Marcia Jarmel, should be applauded for their vision, their assembling of a skilled crew, and the ability to convey profound messages about the importance/influence of music and politics on humankind.  Part of the charm and fascination of the film—(as if the family isn’t enough!)—is the cinematography, eloquent and entertaining in its own right.  The list of cinematographers is long among both the U.S. and Cuban contributors, but the two main ones leading the pack (Roberto Chile from Cuba) and Dave Sperling (from the U.S.), are evidence of the artistic energies and collaborative richness that pervade the film.  Both in landscape and in musical performances, the cinematography awes, instructs, and inspires.

Another element running through the film are the genuine emotions expressed within families and across cultures and musical genres.  If only politics would get the message!  Toward the end of the documentary we hear the disappointing voice of current President Trump increasing restrictions and sanctions against Cuba—just a fraction of the damage he is doing around the world, but aptly illustrative of what we have to lose if he remains President.

A film for all to see who wish for a world united, freedom for families, and love and respect for the power of music.

Posted by donnarcopeland at 11:33 AM